The Resistance Reads: The Rise and Fall of the Third Reich by William Shirer 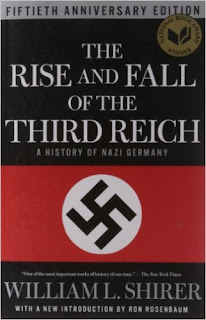 "Those who cannot remember the past are condemned to repeat it," said George Santayana, who died in 1952 when American troops were still occupying Germany. A lot of people have shied away from the comparison of the neo-Nazi/alt-right's rise in America to the Nazi party's rise in Germany but if you've read William Shirer's sobering The Rise and Fall of the Third Reich, a History of Nazi Germany, you will not have the luxury of being able to deny the clear parallels. the 50th anniversary edition was published five years ago, and available in all formats.
It's pretty much all there--mass rallies? Check. Demonizing a religion? Check. Restricting freedom of the press and assembly? Check and double check.
Find the book here.
Posted by Katherine Tomlinson at 12:06 PM