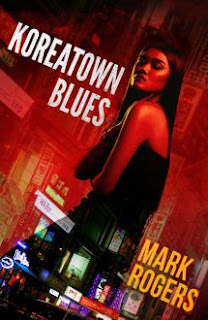 A man walks into a Korean karaoke bar and …
It sounds like the beginning of a joke but it’s not, and by the time the first chapter of Mark Rogers’ outstanding Koreatown Blues concludes with a bang, you’ll realize it’s just the opening riff of a mystery that revitalizes the L.A. noir tradition from the inside out. Readers who know Los Angeles will be delighted by the specificity of the local color. (I lived in Koreatown when I first moved to L.A., and Rogers nails it.)
The story is tight, the prose is taut, and the pacing is cinematic as Rogers unspools his plot, a fantastic thing involving blood feuds and murdered husbands and what the proprietor of the bar refers to (with grim understatement) as “bad business.”
All that would be pleasure enough, but Rogers also knows how to flesh out a character so that everyone from his Latino employees to a flirtatious gypsy cab driver have their moments to shine on the page. Rogers’ L.A. is people with hard-working immigrants who give the lie to stereotypes, racist cops who couldn’t care less how people see them, wannabe actors, and cranky old guys like Jules, Wes’ former boss, who used to tell him that you can outsource a lot of things in America but you still have to go local to get a haircut, your sink fixed, or your car washed.


Wes is a great character, still a young man but one who’s got, as they say, “some city miles on him.” Rogers doles out his backstory in little drips and drabs and what we learn makes us like him even more. The people in Koreatown are his real family, his birth family abandoned him long ago. “Our family was like a chemical compound,” he says without pity, “mix hydrogen and oxygen and you got water. Mix isolation and disinterest and you got my family.” He’s not wallowing in self-pity, he’s just telling you it is what it is. And knowing that has made Wes a man who cares about people who are getting screwed—as he has been screwed. He’s a for-real working class hero and we wish him well, even as we worry that all will NOT be well.
Rogers tightens the screws with every turn of the page and his dialogue is as tough as an old-school gangster movie. “Mrs. Tam gives loans?” Wes asks a fellow customer. “Mrs. Tam gives nothing away,” is the clipped answer he gets. We sense that there are many layers to that answer and we want to stick around to see those layers peeled away.
More than anything else, this book is just a really good read. It’s a page-turner of a pulp told with a literary sensibility and a social conscience. Read this book now because come awards time? It’s going to be on everyone’s short list.

Posted by Katherine Tomlinson at 12:25 AM