An Interview with Mark Rogers, author of Koreatown Blues 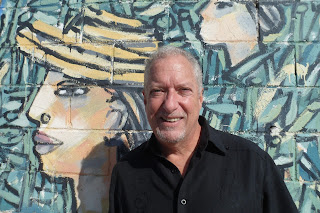 Mark Rogers is a writer and artist whose literary heroes include Charles Bukowski, Willie Vlautin and Charles Portis.  He lives most of the year in Baja California, Mexico with his Sinaloa-born wife, Sophy. His work has appeared in the New York Times, Village Voice and other publications and his travel journalism has brought him to 54 countries; these trips have provided plenty of inspiration for his novels and screenplays. His crime novel Koreatown Blues will be published by Brash Books, Feb. 2017; his mystery novel Red Thread is available from Endeavour Press. Drop into his Wordpress blogs Pissing on My Pistols and Mark Rogers – Author https://markrogersauthor.wordpress.com/ for news about upcoming books from him.

You’re a journalist. Did you start off with short stories or dive right in to fiction?

I started writing fiction in the fifth grade, which was the year I discovered the writer Edgar Rice Burroughs, the author of the Tarzan series. Reading was probably like a drug for me, a way to shut out the world. I’ve never been drawn to writing short stories, and didn’t write fiction at all for many years, until the 1980s, when I wrote the novella now titled “Night Within Night.” Other unpublished novels followed, as well as unproduced screenplays. Luckily, I found rewards in the process, since I had very little encouragement. This all changed last April, when I had four novels contracted in one month, from four different publishers. Some of these works had been knocking around for decades, while others, like “Koreatown Blues,” were written in the last year or so. That very first novella, “Night Within Night” will be published next year by London-based Endeavour Press. I’m very psyched to have made the transition from “writer” to “author.”

Most writers are readers, who are the writers who influenced you?

It’s a bit like an archeological dig, with the deepest layer being Edgar Rice Burroughs, up to Knut Hamsun and Henry Miller in my late teens, to Charles Bukowski, Charles Portis, Charles Willeford, and Willy Vlautin. I’ve come to enjoy a crisp, clean line, which is what I try to do in my own work.  Kaurismäki.
On the crime novel side, I’m a big fan of John D. MacDonald, Elmore Leonard, and Raymond Chandler. There are other one-offs that I cherish, like “The Hustler” by Walter Tevis, and “Fat City” by Leonard Gardner. I think I’m also influenced by film, especially the movies by Finnish director Aki

The first one that comes to mind is “Lean on Pete” by Willy Vlautin. This is a very deceptive book that reads like a YA novel, but throws a wicked punch. You can read more about it HERE. Vlautin is an amazing talent with a huge heart. He’s often compared to Steinbeck.

Do you have an agent?

How did you end up at Brash Books?

I received an email from a site called Freedom With Writing, that mentioned Brash Books was open to unagented submissions. I looked at Brash’s site and liked what they were doing. I mentioned to my agent that I would approach Brash on my own with “Koreatown Blues,” since she was occupied with other work of mine. Brash was amazing. I sent them the first 25 pages and within a few hours they asked for the complete manuscript. I think it was only five days later that I got the email saying they loved the book and wanted to publish it. This kind of express train response is really rare and I was blown away. Working with the two publishers, Lee Goldberg, and Joel Goldman (crime writers themselves) has been an amazing experience, from editing, to cover design, to marketing.

You travel for a living—are there any countries that you want to visit again and again?

I have a great affection for Thailand, which I’ve visited a half-dozen times. I’ve just completed a crime novel set in Bangkok, titled “Sky Dog.” That’s presently going through a beta reader process and I hope to have my agent begin submitting it in January.

What’s on your travel “bucket list,” places you’ve never been but want to visit?

I always wanted to visit Cuba, but before it became open again. Unfortunately, I waited too long. It now appears to be going through an unappealing tourism transformation. A major part of my family tree is from Wales. I’ve never been, so that would be at the top of my list, especially if it was at least a three-month stay to work on a new book while exploring the country.

When you write, do you listen to music, or do you find that distracting?

I can’t listen to music with lyrics – that is way too distracting for me. I don’t always listen to music, but when I do, I listen to soundtracks. Some of my favorites are the soundtracks to “The Counselor,” “Drive,” and “Last of the Mohicans.” I also listen to a lot of Phillip Glass. 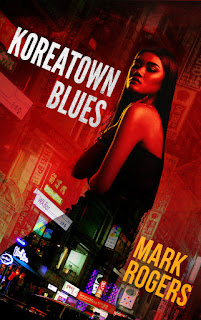 Have you ever done karaoke yourself and if so, what’s your song?

I lived in Koreatown in LA for a couple of years, and used to drop into my neighborhood nightclub a couple of nights a week. I sang pretty much everything, but my signature song was “Always On My Mind.” The song reverberated for me, since I was going through a divorce at the time, and I had a crush on the Korean barmaid. I now live in Mexico, and at every family party someone eventually fires up the karaoke machine. Those of us who don’t go to church have to sing somewhere, so I guess it’s karaoke for me.

Is Koreatown Blues a one-off or will it be a series? (Please)

Posted by Katherine Tomlinson at 9:16 AM