The Passenger by Lisa Lutz, a review 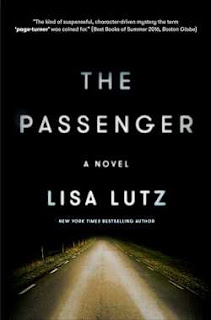 In Lisa Lutz’ novel The Passenger, a woman running from her past and accusations of murder receives help from a VERY unexpected person.

TANYA DUBOIS was in the shower when her husband FRANK fell down the stairs in their house and died. She tried moving his body but only smeared the blood around his head. (He’s put on more than a few pounds.) Without really thinking about it, she grabs the money he kept in his toolbox (his gambling stash), packs a bag and takes off. There are only two people she regrets  leaving behind, CAROL at the bar where she works and DR. MIKE, her chiropractor and part-time lover. She can’t bother Carol—she’ll wake her kids—but she drives by Dr. Mike’s house and lets herself in with the key under a fake rock. He asks her if she needs an “adjustment” (their little joke) and after they have sex, he realizes that it’s the last time. She kisses him goodbye and gets on the road.

This is a character study of a woman who is trying to outrun her past and her “self” and ends up tripping over that past at every turn—and sometimes it’s not even her own past, as when a man shows up looking for another woman entirely. Tanya is a practical woman who has her limits and has her priorities, but we see that she’s capable of meanness—and downright cruelty—at times. In the end, after all the changes she goes through, Tanya has to figure out WHO she really is. But as much time as we’ve spent with her, we really don’t know that much about her ourselves. (Lutz puts us in Tanya’s head via copious internal monologue, but it still feels a little superficial.)

In the end, the big secret feels a bit familiar (and even predictable), but the story is a page turner up until then.

Posted by Katherine Tomlinson at 2:15 PM