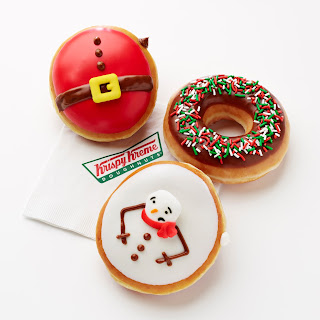 For years, Krispy Kreme Donuts were an East Coast secret. You could even buy them at the Pentagon. When they first showed up in L.A., the lines were out the door and around the block. "Are they really that good?" my roommate asked me. "Oh yeah," I replied.
Krispy Kreme built a plant in Van Nuys that was open 24 hours and you could watch the donuts being bathed in that lovely sugar glaze. (And that's the only kind I ever bought--for me jelly filled and chocolate-iced were just gilding the lily. It was raised/glazed or nothing for me.)
The low-carb, Atkins diet craze kind of killed Krispy Kreme for a while and a lot of the stores that opened in the first flush of donut-mania closed.
But I'm glad to see that Krispy Kreme is still at it. I think these Christmas donuts rae adorable. And realize it's a REALLY good thing, there aren't any Krispy Kreme outlets anywhere near me.
Posted by Katherine Tomlinson at 12:24 PM