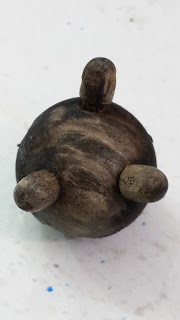 The house we rent was built in the seventies, but we live in one of the oldest neighborhoods on this side of the city. So who knows what was here before we were. (Pretty sure it's not a graveyard but hear me out.)

About a week after we moved in, we found a single rusted razor blade lying in the grass. So ... was someone out here shaving one day, letting the rain wash off the lather? About a month after that we found a small, olive green "plastic soldier" of the sort made memorable in the W.D. County short story "Plastic Soldiers." (If you haven't read "Plastic Soldiers," you need to spend 99 cents right now and go buy Speedloader, an anthology that also contains stories by Nigel Bird and Matthew C. Funk, whose writing is also always worth reading. But "Plastic Soldiers?" It's a one-of-a-kind story. Brutal to read and absolutely unforgettable. I've read a LOT of short stories, and it's probably in my top five, right up there with Harlan Ellison's "I Have No Mouth and I Must Scream" and Shirley Jackson's "The Lottery" and "the Rockinghorse Winner" by D.H. Lawrence, and Ray Bradbury's "A Sound of Thunder." "Plastic Soldiers" should be taught in high school English classes.) But I digress.

Over the year we've lived here, various things have shown up in our lawn, sort of like dinosaur skeletons uncovered by scouring winds in the western states. Today this thing showed up.  It's made of wood and about the size of a gobstopper candy. It's made of wood and the spikes unscrew.  It's hard to tell how old it is but the scientist in the house thinks it could be many decades old. Wood decays at different rates. It'll take a downed pine tree 200-300 years to decompose, a spruce tree (what you find a lot of in the Pacific Northwest) will only last 50-100 years. So--what was this thing? A child's toy? Nowadays, we'd keep something like this out of a kids' hands for fear of choking hazards. But it doesn't seem strong enough for any industrial application.
But what it DOES seem good for is a story prompt.
"The Yard of Lost Things."
What would you do if things suddenly started appearing in your yard, dug up by your dog, or revealed by a hard rain? Would some of those items be valuable? Would some of those items be dangerous? Would some hold clues to murder? Or a wedding ring lost by a woman gardening 100 years ago?  I find the possibilities endlessly seductive. I want to write that story. But as it happens ... I'm on deadline. So it's going to have to go into the file for now.
Posted by Katherine Tomlinson at 6:29 PM