Excerpt from DOORS by Joanne Renaud

Artist/illustrator Joanne Renaud's new novel, Doors is a sequel to her 2915 A Question of Time. As the title implies, the story involves a form of time travel, but she has created a new twist on an old trope, playing with the multiverse.  Here's how the publishers at Champagne books describe Doors:

Jackie Karam always knew her friend Orne was a weirdo, even before he enlists her help in opening a door to an alternate dimension. His theory is that if one could find a book one lost, a book one loved but can no longer remember anything about, it might open a door to another world. Jackie just happens to have such a book in her past. A science fiction novel her high school teacher had recommended to her before he died in a car crash.

Jackie loves hanging out with her handsome, charming, eccentric friend, so she agrees on a trip back to her hometown to look for Mr. Forrest's book. She finds it in the White Springs library, and just as Orne hoped, opens a door to another dimension, one altered from the world she knows. Not just altered, but better. Her career is a success, her old teacher is alive and well, and her relationship with Orne is so much more intimate. Her own world is so drab and hopeless by contrast, she's tempted to stay.

But does she truly belong in this other world? What happens to this world's Jackie if she stays? And what will happen to her, if she refuses to go back through that door?
Sounds like fun doesn't it? Here's an excerpt:
Ordinarily I would have been afraid of running in heels, but I was so determined to get down to the Village that it didn’t occur to me to trip. I think a guy whistled at me while I sprinted down the street, but I barely noticed.


I usually brought my MP3 player to while away my hours on the subway, but I rushed out in such a hurry 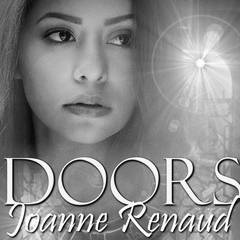 I left that and my phone behind. I was on edge, going down the deep, echoing escalator to the A platform at the 181st street station, but transferring to the One was even worse. Rushing across the vast expanse and winding corridors of the 163rd street station and cramming myself into an elevator with dozens of other blank-faced commuters only heightened my paranoia. Everything seemed normal. This reality seemed just like the Manhattan I had grown to love and hate. But this creeping sensation wouldn’t leave me, that I would turn the corner and there would be Nazis. Nazis! There were always Nazis in alternate timelines!
Before I could work myself up into a frothing state, the One dropped me off in Greenwich Village. It was dinnertime, a weekday, and there was the usual crowd of hipsters, trust fund babies, and roving bands of Asian and European tourists laden down with shopping bags. I brushed past a British woman asking me for directions, and made a beeline to Washington Square.
Half the park was under construction, as usual, and two competing drum circles occupied the benches. My heart beat like one of those drums when I ran up the stairs to the door of his brownstone. Was this universe’s Orne going to be different than the one I’d left behind? Could I tell him what had happened to me without him thinking I had gone bug fucking nuts?
After I rang the doorbell, I shivered as if it were the dead of winter.
When he opened it, looking the same as usual, with his stylishly mussed hair and ascot, it took all my willpower not to collapse in relief. “Orne.” A sob caught my voice. “Thank God, I so need to talk to you.”
“I’m happy to hear that, Jacqueline,” he said. But instead of hanging back, with his usual ironic superior air, he stepped forward, his eyes intent on mine, and put his arm around my waist, his fingers settling on my hip.
It wasn’t exactly a hug. But it was close enough that I recoiled in shock. “Orne!”
Orne flinched. A hurt look came over his face. “Wait, I didn’t mean—” Then he straightened, as if remembering who he was.
“Well,” he said haughtily, “it seems that you’re still angry at me. I didn’t mean to impose, Jacqueline.”
“Angry at you? Why would I be angry at you?”
He stared at me as if I’d sprouted a second head. “You know. For what happened in the Hamptons. Don’t you remember?”
And all of a sudden I did.
In this reality, he had taken me to his cousin Sophia’s wedding. He’d told me he could only bear them if he drank himself into a coma. Well, here I had seen that for myself. Not that I could blame him. His perfectly coiffed aunt Edie was botoxed to such a degree that her facial muscles had frozen in place, and even though she glittered with jewels, her eyes were bottomless pits of misery. His uncle Fuzzy, though he looked handsome, wholesome and square-jawed, not only drank like a fish, and not only kept going on and on at increasing volume about war and Muslims and taxes and poor people leeching off his taxes, but he kept staring down my dress as well as the dresses of half the bridesmaids. And I saw Sophia, the blushing bride herself, her nose red and her eyes dilated, licking her lower lip whenever the best man was looking. It made me feel sorry for the clueless bridegroom, some blond WASP-y nonentity, but mainly I wanted to run in the opposite direction.
Not surprisingly, both of us got blitzed out of our minds at the reception. Then we’d gone outside and ended up making out. I couldn’t remember it well because I’d been drunk, but it had definitely happened. I remembered the awkward fumbling, the rich, faintly musky scent of his cologne, the taste of his lips and tongue locking with mine.
As I stared at him, appalled, I blushed furiously. I couldn’t believe I was thinking about this. What the hell kind of world had I arrived in?
Buy Doors here.

Posted by Katherine Tomlinson at 12:19 AM