Artists Who Write/Writers Who Art

I first encountered Bierce as an illustrator. I thought his King Arthur illustrations were fantastic. (To see a portfolio of his illustrations for Oscar Wilde's Salome. go here.)

Beardsley's illustrations were lush and detailed and for me, as much as Alphonse Mucha, defined Art Nouveau. 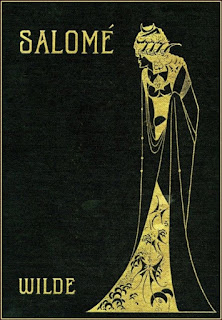 He had a very distinct style, and even for a kid, instantly recognizable.

I then stumbled across The Devil's Dictionary (formerly known as The Cynic's Word Book), a dark satire that was snarky and satisfying. For example:

Lawyer
(n.) One skilled in circumvention of the law.


I then read a number of his short story collections, which tended toward the fantastical and speculative. I liked his short fiction a lot--especially his writing on war--and wondered why he was so often eclipsed by Mark Twain in English classes.
Here's an interesting article on whether Ambrose Bierce was a better writer than Mark Twain. I don't think he was--I took a whole semester of Twain when I was in college and read pretty much everything he wrote, including "War Prayer" and Gilded Age. I think Twain had more range. But if you're stacking up short stories, I'll take Ambrose Pierce's "An Occurrence at Owl Creek Bridge" over "The Celebrated Jumping Frog of Calaveras County." Kurt Vonnegut considered the Bierce story to be the greatest short story ever written.

You can watch the classic short film based on the story on Vimeo and fans of Twilight Zone may remember that it once ran as a TZ episode.  is a story that has inspired a number of movies--from Jacob's Ladder to Stay. It's a genius story and if that were the only thing that Bierce ever wrote, it would have still cemented his legacy as an American writer. And then of course, there is his legend. Bierce disappeared while in Mexico--he's the title character in the film The Old Gringo--and the mystery of his end has made him into a nearly mythic figure. For more about Bierce, check out this site.

And consider this quote the next time you're tempted to throw in some contemporary slang in a book:

Posted by Katherine Tomlinson at 7:02 PM