And now, on to the interview with Joanne Renaud! 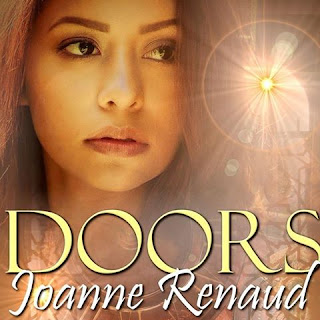 Let’s talk about Doors, your latest novel, a time-travel romance.

Do you listen to music as you write and if so, what was in your playlist for this book?

Why yes, I listened to a great deal of music—Doors is partially about people bonding through music, even if they don’t always listen to the same thing. Orne, the hero of Doors, is an ex-raver who loves electronica, both classic and current (including seminal acts like Phuture and Orbital), and Jackie is an ex-punk who loves Rage Against the Machine.  You can listen to the playlist here—there are many songs that I referred to throughout the book, including Wall of Voodoo’s “Mexican Radio,” and Phuture’s “Acid Trax.”

Did you watch any television shows or movies to transport you to the period? Any other resources you used?

Well, Doors isn’t really a time travel book where people travel to another period of history—it’s more about how parallel timelines form as a result of time travel.  It’s more along the lines of Sliding Doors or Lathe of Heaven. (Lathe and Ursula LeGuin was a HUGE influence on this book.) It’s very much in the multiverse theory of time travel. It’s set in the present day. (Well, 2010.)

Your first book, A Question of Time, was also a time-travel romance, but Doors is not a direct sequel. Will there be a third time-travel book to “round out” the series?

Yup! There’s going to be a third book, set in 1966—it’s called Out of Time.  It gets into the origin event of what causes the ‘time bubble’ phenomenon in the first place, plus Cold War spying shenanigans and mod culture and music and lots of awesome swinging ‘60s stuff. It’s set in New York, again, but it’s such a fascinating city to me.

Both your books were published by Champagne Books. Did you have the same editor for both? 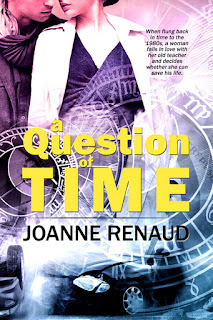 Yes, my editor Diane, who shaped the book into what it is with her amazing and perceptive suggestions. A good editor is worth her weight in gold, and I’m very lucky to have her.

Did you have developmental editing assistance or was it mostly copy-editing?

Diane helped shape this book like a sculptor chisels a block of marble. Doors wouldn’t have been the same without her.

If you could live during any era in any place, where would it be, and what is it about that time/place that attracts you?

I don’t want to live any other place other than here and now, honestly. There are many visits I’d love to visit with sufficient preparation—like vaccinations, money and a complete authentic wardrobe so I don’t stick out in any way. The 18th century or Napoleonic era would be fascinating to see, but I call those the “die in a ditch” eras—it’s nothing I’d want to go see without a TON of preparation.  If I ended up in 1788 or something, I feel that I would step out of my time bubble/time machine and immediately get some horribly contagious thing and die coughing up blood a few hours later. I love how much we’ve advanced in medicine, don’t you?

For the non “die in a ditch” eras, I’d love to see the 1960s, the late 1970s and the 1980s for all the music and the pop culture, but even then, the money problem would be tricky. Money has changed enormously over the past ten years! One of my favorite time travel shows is the late great Journeyman—it’s one of the few time travel shows that addresses the money problem in detail.

I have several. My favorites are The Doomsday Book by Connie Willis, The Green Futures of Tycho by William Sleator, and Lest Darkness Fall by L. Sprague de Camp. My favorite time travel romance is Jude Deveraux’s A Knight in Shining Armor.

Do you ever write short stories these days or do you store up your creativity for longer work?

I’m not very good at shorter works. I think I’ve written about three short stories over the past six years. Even a short story always wants to turn into a novella, and novellas always turn into novels. I can’t help myself!

You’ve lived and worked in both New York and L.A. Any thoughts on which is the more supportive environment for creatives? (More networking opportunities? More organizations? More job opportunities?)

I’d say that New York is marginally more supportive than LA in that it’s easier to get around with the public transit—LA’s public transit is better these days, but it’s so spread out it takes considerable effort to meet friends who don’t live right next to me. However, it’s so incredibly expensive these days in NYC that the advantages aren’t really that apparent anymore.

In addition to writing, you’re also an artist whose work has been published in magazines, textbooks, and in graphic novels. As an artist/illustrator, who are your inspirations?

I’ve been more focused on writing lately, with Doors coming out, but I’m usually inspired by 18th and 19th century art (like Adelaide Labille-Guiard and Elisabeth Sonrel, two awesome lady artists I love). Alphonse Mucha of course is also a perennial favorite. (Doors features this work of Mucha’s—Maude Adams as Joan of Arc-- which hangs at the Met.)

I also love looking at Pino Daeni and Charles Geer’s work (Geer has an amazing portfolio of book covers ranging from 1960s Gothics to historicals to classic kid lit like The Mad Scientists’ Club). I’ve also discovered Yoshikazu Yasuhiko, who did awesome mangas based on the lives of Nero and Joan of Arc.

Which came first, the pictures or the words? Or did you always write and illustrate your own stories?

Words and pictures always went together for me. One of the first books I “wrote” was a Choose Your Own Adventure called “The Secret of Unicorn Valley.” Someday I need to scan it in and upload it. It was so hilariously 1980s. The secret is… the valley had unicorns!


What blogs/sites do you regularly read?

Metafilter, io9, the AV Club, and Dear Author are my mainstays.

Did you have a pet as a child?

I had two cats growing up—Frances and Spunky. They were both calicos. My parents were obsessed with calicos, for some reason.

I know your parents died when you were quite young. Do you ever find yourself “writing your parents” as characters? (I have used both my grandmother—in a script—and my sister as characters. Not so much my parents.)

Well, apart from the fact that I frequently go to the “dead parent” well-- which I admit is an incredibly well-worn trope, but hey, I write what I know! – the heroine usually has a warm relationship with the dad (when he was alive) and a more distant relationship with the mom (if she’s alive).  I make a conscious effort to mix it up now more, so it’s not quite so Disney-movie-ish.  I was quite close to my dad when he was alive, but not so much with my mother, unfortunately. From what I remember, she was pretty nice and supportive, but I was so young when she died, I never really developed much of a relationship with her. It’s a bummer, but what can you do?

Do you have a writing “process?”  Do you have a set number of pages/words you write every day no matter what?

I’m not that organized, I’m afraid. One thing that does help me is not outlining quite as heavily as I used to, and instead of planning, “pantsing’” (i.e. flying by the seat of my pants) instead.  For some reason, excessive outlining kills a story for me. I’m not quite sure why.

However, I do take notes for what will happen at the end of the story, but I write it down by hand, and keep it in a separate notebook for later reference. I have more unfinished novels to my name than finished ones at this point, but the stories I did finish were done with this method-- so I’m hopeful!

Usually I prefer third person, past tense, but I do love the occasional first person. Doors was written in first person—crazy, I know! Virginia Coffman, one of my favorite romance authors, wrote extensively in first person, and she has been a big influence on me.

Oh God, no. I hate present tense with the burning intensity of a thousand white hot suns. It can work for the occasional short story, but for longer works it often reads like a character is reciting a grocery list inside their heads.

IMO Hilary Mantel is one of the few authors who can manage to make present tense work (A Place of Greater Safety is one of my favorite historical novels).

You’ve traveled to some interesting places, including a study stint in Ireland. If someone offered you an all-expenses-paid trip to wherever you wanted to go, where would that be?

At the risk of sounding incredibly unimaginative, I’d love to go back to France on a research trip. There’s so much there I haven’t seen. I’d love to see the Auvergne and just hike around the mountains and chill and eat lots of cassoulet and soup.

Optimistic realist! The glass is at the halfway mark. Precisely.

My next time travel book, Out of Time, is partly told from the POV of a 1960s journalist, Terry McCall. That’s challenging enough for me! Usually I stick pretty strictly to the POVs of my heroines.

I have another book that I’m working on right now with Kat Laurange—it’s a near-future SF romance based on the story of Rapunzel, called The Titanium Tower. It’s written from the two POVs of the hero and heroine—the hero is a space marine from Iowa, and the heroine is Indian-American and nominally Hindu. So that’s double the challenge I usually take on for myself, but it helps I have a co-author. 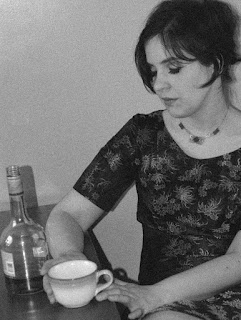 Posted by Katherine Tomlinson at 10:40 PM