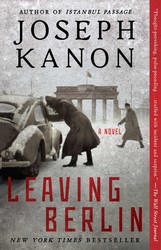 In Joseph Kanon’s book, Leaving Berlin, an American Communist writer returns to Berlin as a spy and discovers that the woman he once loved is now a Russian spy. This is a nicely atmospheric, character-driven spy thriller set roughly the same time as Kanon’s previous book TThe Good German. We’re immediately dropped into the complex political and ideological situation that was postwar Berlin, and Kanon does an excellent job of introducing us to the various characters with a minimum of fuss. The city (as much a character as any of the humans) is haunted for Alex, and a series of flashbacks fills in his complicated relationship with his former lover . (All of Kanon’s books have a woman like Irene, even Los Alamos, and we’re reminded of the line from The Good German, “You should never have come back to Berlin.”)

This is Alex’s story and he’s an intriguing protagonist. He’s a man being manipulated, but he doesn’t come off as weak or passive. His friends—like the playwright Bertolt Brecht—and his admirers—almost everyone—respect his work, which is passionate and anti-Fascist and brave. But it’s not simple—nothing is simple in Berlin.

Alex’s lover Irene is not as fascinating to us as she is to Alex, but she is playing a dangerous game of her own. She doesn’t love her Russian lover, but she knows it’s useful to have powerful friends.

The central characters are all strong, but that’s to be expected. What makes the book a treat is that the minor characters are also very well-crafted. There’s the young bellboy who is a conduit to the Americans, a boy not much older than Alex’s son Peter. There are the various artists and expatriates and repatriated Germans who circle the story. Like E.L. Doctorow, Kanon has a knack for wearing real-life people into a fiction and creating something quite plausible.

There’s tension here and true thriller elements and each scene builds on each other to create a sense of relentless action even when the action is merely intellectual. (The dialogue is excellent.)

Some of the one-on-one scenes simply crackle on the page, like the first meeting Alex has with a Stasi agent. He is a true believer in the Communist party, a man with nothing but contempt for Alex’s former lover—“a woman like that.” But it’s complicated. Who was a Nazi, who wasn’t? Every person has a past. Every conversation has a subtext.

Ultimately, this is an intense period thriller with an emotional core. Its appeal is along the lines of cold war thrillers like those by Len Deighton.
Posted by Katherine Tomlinson at 11:54 AM