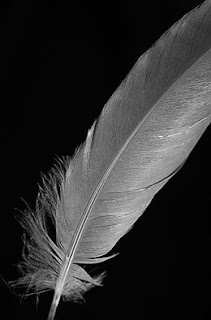 Sometimes you get a story bunny that just will not leave you alone, no matter how often you push it aside. The last time that happened to me was when the "Vampire Cinderella" idea pushed me to write Bride of the Midnight King.  I know where this one came from--hours spent refining my entry into the "Be James Patterson's co-author" contest, along with thinking about under-used supernatural beings in paranormal books.
The idea is that a little kid, a girl, I think, finds an angel feather in the woods. It's big--bigger than she is, anyway, and looks like a piece of brushed steal sculpture until you touch it. She brings the angel back home and takes it upstairs to show it to her little brother, a kid with some congenital and fatal disease who is bed-bound. And when he touches it,he's healed.
And consequences ensue.
I figure there are several of these angel feather artifacts scattered all over the world and some have been used for harming as well as healing.
How do you destroy such an artifact? It's not like you can throw it into the fires of Mt. Doom.
And of course, word of this object would get out.
And the government would probably get involved.
Maybe now that I've written this much down, the idea will be happy to sit in the back of my unconscious.
i know there's something there, but not sure what to do with it.
Posted by Katherine Tomlinson at 3:17 PM