Drunk on the Moon--Werewolf PI Roman Dalton is back 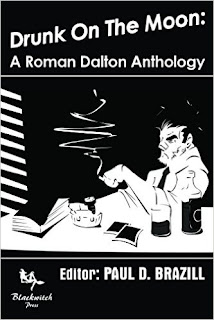 Roman Dalton, the werewolf PI created by Paul D. Brazill, first appeared on the pages of Dark Valentine Magazine, a orint and digital publication I published. We ran a second adventure of Roman's and soon after that, Paul invited me to join him and a group of other writers (Kate Laity, John Donald Carlucci, Allan Leverone) to contribute a story to his anthology of Roman Dalton stories, Drunk on the Moon.
It was a lot of fun playing in Paul's sandbox and I enjoyed writing my story, which included Persian fire demons, albanian gangster werewolves and a whole lot of weirdness.
There's a new eidtion of the anthology out now with a deliberately retro cover, and newly slicked up stories. Right now it's free on Kindle, so if you like urban fantasy and hard-boiled noir, you should check it out.

Posted by Katherine Tomlinson at 6:17 PM