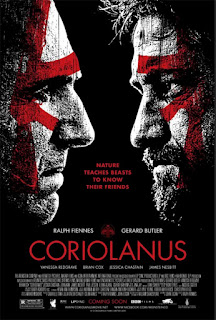 When I read John Locke's adaptation of Coriolanus for a film market in 2009, I scoffed. Although I thought he did a brilliant job with the language and the conceit of the play (which was filmed in Serbia, Montenegro and the UK), I predicted it would not be very commercial. In fact, it was a box office disaster, earning a little over a million dollars in its global release. (Interestingly, three-quarters of that million was from US dollars, it only earned $31 million overseas.)
I've never seen the play performed live an I barely remember reading it, so when the dvd of Coriolanus came out, I picked it up. And was ... dazzled.
Ralph Fiennes directed the movie and stars in the title role. with his shaved head and facial scars he looks every inch the warrior he is playing, a soldier who never wanted to be a politician and who has no patience (or love) for the common people who want to embrace him as their hero. In the Harry Potter movies, Fiennes delivers lines like, "Harry Potter, the boy who lived, come to die," with a sinister silkiness. Here he blows out all the stops--sometimes whispering his lines, sometimes roaring them like the "dragon" he becomes. It's a symphonic performance even when it skirts close to melodrama.
Vanessa Redgrave plays Coriolanus' mother--a great part for a mature actress--with a ferocity that just wipes everyone off the screen. (You'll get a glimpse of her intensity in the trailer.)She is a master (mistress) of manipulation but her ambitions for her only son go horribly awry. With her coronet of silver braids and her noble profile (it should be on a coin), she takes command of the story.  "I would the gods had nothing else to do but confirm my curses," she spits at a Tribune who has betrayed her son. (This story is full of excellent insults, my favorite being, "This Triton of minnows.") 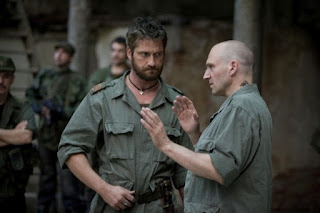 Of course, she's Vanessa Redgrave... so you'd expect her to be awesome, but what's surprising is Gerard Butler's mastery of the Shakespeare's words. He's terrific and in the scene where Coriolanus' mother comes to beg him not to destroy Rome, he's got one line and does everything else with his eyes and his body language.
And then there's Brian Cox. Brian Cox should be in every Shakespeare production somewhere.  He's just the perfect actor.
The setting of the story is a world of graffiti and greed, and the color scheme is monochromatic, often black and white in color (or more precisely...gray and white with splashes of blood). Blood is spilled here, and there are a couple of brutally intimate scenes where one or another character is slitting someone's throat or knifing them int he guts. (The story begins with a character sharpening the blade he will later sheathe in a body.)  The war-torn country LOOKS war-torn and not art-directed, and some of the scenes could have come from an Occupy Wall Street rally.
The directing is spotty and Fiennes occasionally makes some creative choices that seem a bit iffy. But all in all, this is a terrific production of one of Shakespeare's lesser-known plays and it's worth two hours of your time.

Posted by Katherine Tomlinson at 9:46 PM