Because you know someone who's had breast cancer 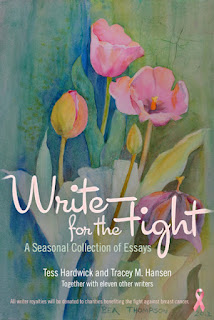 Breast cancer pretty much decimated the women of my mother's and grandmother's generation. It got my beloved Great-Aunt Helen (and a cleaner-living, more God-fearing, gentle woman you would never meet) and it also claimed my Great-Aunt Marie, who was a newspaperwoman in Chicago and during the war captured a spy!!
My Aunt Mabel died of breast cancer. An aunt on my father's side died of it too.
Two friends, one of them a very close friend, have had bushes with the disease and are now cancer-free.
But it's a sneaky disease. And 1 in 8 women are expected to develop it. (Here are some statistics.)
A charity anthology of seasonal essays: Write for the Fight, is now out and the proceeds are earmarked for breast cancer research. Right now it's free, though, so help spread the word.

Posted by Katherine Tomlinson at 11:14 PM