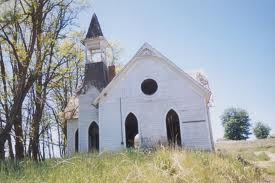 Over at her blog, Patti Abbott has posed a challenge--write a drabble using one of several photographs for inspiration. (A drabble is a story that is complete in exactly 100 words, a fiendish literary form.) The links to the entries are posted at Pattinase, check out the others.

The T’andoor’ii explorers had not thought it likely they would encounter any standing structures remaining in the explora-zone, so they were thrilled when they came across a ruined building that still had an intact roof.

There was much debate about the purpose of the building, which was too large to be a single-family dwelling but too small to contain a whole community. The youngest of the explorers suggested it might be some sort of house of worship but his-her suggestion was dismissed. From what the explorers knew of the dead civilization they were studying, it had been a godless one.
Posted by Katherine Tomlinson at 7:46 AM