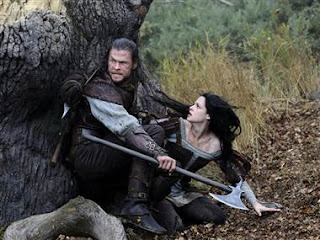 I saw Snow White and the Huntsman this weekend. It looks gorgeous and had a couple of truly magical moments in it. But it also had a line, a throw-away line, a tossed off moment that got a big laugh and made me cringe.
Snow White and the Huntsman are struggling through a dark enchanted forest chased by the Queen's brother and a miscellaneous assortment of murderous  minions. Realizing that Snow White's long skirt is making it hard for her to run, the Huntsman slashes it off with his knife.
Snow White, who's really been through quite a lot in the last few minutes of screen time, shrinks back, uncertain of the Huntsman's intentions.
"Don't flatter yourself," he snarls and then they move on as the audience chuckles.
"Don't flatter yourself?"

Call me a cranky feminist but I couldn't help but notice that the script was written by three men.

Don't get me wrong. For the most part, Snow White is witten as brave and strong and true and noble. I'm not sure how she learned to sword fight whilst  being locked up in a castle keep for years, or how the Duke managed to procure that snazzy form-fitting armor at short notice, but this is a fairy tale after all.
Did we really need that line?
Am I just being over-sensitive? (One of the disparaging insults hurled at early feminists was that the had no sense of humor when it came to sexist jokes.) After all, I was the only one not laughing.
Sigh


Posted by Katherine Tomlinson at 11:02 AM