The Summer of Shakespeare is coming! 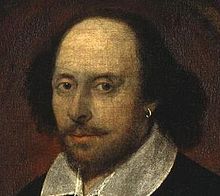 I am newly excited about the bard. And a conversation I had with a friend has  fired me up. He's never read one of the plays and believes he's not the poorer for it. A screenwriter, he is full of suggestions where Will could "show not tell" in filmed productions of his plays. He says when he goes to a Shakespeare movie  it's like listening to a foreign language and he needs subtitles.
He is convinced that no one in high school even studies Shakespeare any more and that "things have changed since you were in school."  (He's only five years younger than I am, so you can imagine how well that comment went over!)  He said listening to me talk about the beauty and the richness of Shakespeare's  language gave him new appreciation for the geeks who love to learn Klingon.
He is convinced that I am operating with a different set of cultural references than most people and even when I pointed out that practically every single news article on the Nicole Brown Simpson/Ronald Goldman murder referenced Othello somewhere, stood firm.
"Why do you think William Shakespeare is the greatest English writer?"
I told him why but didn't convince him.
So, I started thinking about the question. I started thinking about how falling in love with Shakespeare informed my writing and enriched my life.  And the result is going to be a summer long obsession with Shakespeare.  No matter what else I post, there's going to be a whole lot of shak3-spearing goin' on.  Hope you can join me.
Posted by Katherine Tomlinson at 9:28 AM