A Tale of Three Richards

One of the pleasures of seeing multiple productions of a play is being able to compare and contrast the way each actor plays a role and makes it his or her own. I recently saw both versions of the filmed production of Danny Boyle's Frankenstein, starring Benedict Cumberbatch and Jonny Lee Miller. The two men switched off in the roles and although I think Cumberbatch is a terrific actor, I thought Miller was better in both parts. (I thought Cumberbatch was way too remote as Dr. Frankenstein, and a little too "Sherlockian." And his physicality worked against him as the creature whereas Miller's stockier, shorter form suited the "base creaure" more solidly.)
Richard the III is one of the best villains Shakespeare (or anyone else) ever imagined, a real-life player in the Game of Thrones who murdered and manipulated his way to the crown, only to lose it just two  years later. He was only 33 when he died, but like another historical figure who died at 33, his legacy lives on.
Richard III was a hunchback and it's intriguing to see how some actors exploit that physical trait and others don't. Here's Laurence Olivier in the play's most famous scene--the wooing of Lady Anne, the widow of a man Richard III has had murdered. That's Claire Bloom as Lady Anne. (More about her later in the summer. And what's up with that headdress she's wearing? It looks like it came from a low-budget high school production.)
The 1955 Olivier Richard III is available on YouTube in 15 parts if you have the patience to watch it a bit at a time. (Pretend you're watching it old school on a weekend television movie marathon with a zillion commercials.)

Here's Ian McKellen wooing Annette Bening in the same scene. This was a really interesting filmed production that was set in a Fascist kind of world, very stylized (sort of the father to Ralph Fiennes' upcoming Coriolanus.)  Who wouldn't be seduced by McKellen's gorgeous words and slippery endearments?  His hump is subtle, more of a slouch really. 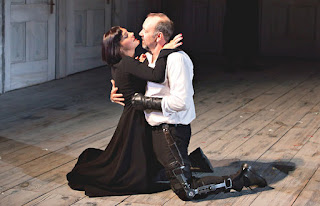 I love this version of the play.  You can buy it used on Amazon.com for less than $6.
Kevin Spacey was touring earlier this year in a production staged by American Beauty director Sam Mendes.  Like the McKellen movie (which grew out of a National Theater production), it is set in a sort of vague 30s time period. Spacey flings himself into the role, his twisted body language and braced legs selling his character's deformities. Here's the Playbill.com featurette of highlights from the show, which includes a scrap of the wooing of Lady Anne.
Here's an audio version of Kenneth Branagh performing the same scene. He plays it quickly and rather heartily, and in a way that seems better suited to his role as Benedict in Much Ado About Nothing. And just for context, here's the wooing scene from a silent version of the play. (Don't you LOVE the Internet?)
Posted by Katherine Tomlinson at 1:42 PM