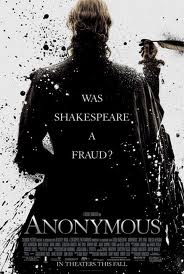 Most survey courses in Shakespeare don't really get into the question of whether "Shakespeare" was actually someone else, but I had a college professor who was sort of fascinated by the topic, so he added in writings by all the top contenders--Christopher Marlowe, Francis Bacon. For me, it doesn't really matter. It's like the debate over who "Jack the Ripper" might have been. The plays exist; they're wonderful, and whoever wrote them chose to use the name Shakespeare.
Wikipedia has a great synopsis of the whole authorship question here.
You probably missed it, but last year director Roland Emmerich's movie Anonymous weighed in on the question,  making the claim that Edward De Vere (the Earl of Oxford) was the author. Rhys Ifans played the Earl with Vanessa Redgrave as Queen Elizabeth I.

Posted by Katherine Tomlinson at 7:29 PM