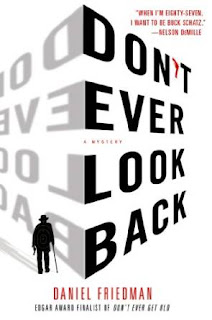 I grew up in what was essentially a three-generation household. My maternal grandparents stayed with us off and on for months at a time because my grandfather, who’d been born in the last years of the 19th century and was ancient even when I was a kid, was being treated for various ailments at the VA hospital in the city where we lived. My grandmother hated my father and the feeling was mutual, and their ongoing hostilities made life a living hell for my mother.

I loved my grandmother dearly but she was one tough old woman who spoke her mind and damn the consequences. Buck Schatz, the ornery ex-cop at the center of Daniel Friedman’s new novel (the second in a much-heralded series) reminds me a lot of my grandmother. This was a woman who was such a terrible cook that any time we went to see her, we’d insist on taking her out to eat to avoid having to consume some godawful concoction she’d whip up out of lime gelatin and mayonnaise. And yet, she had no problem criticizing her daughter’s cooking. But at least she had the option of cooking for herself. That’s not true for Bud Schatz, and one of the (many) indignities he’s had to suffer at the Valhalla Estates Assisted Lifestyle Community for Older Adults is that the food is close to inedible.

"Whoever said that life in assisted-living facilities lacked variety clearly never had breakfast at Valhalla. A single plate of scrambled eggs could have burnt bits, cold places, and runny parts."

Buck’s a retired cop who is still trying to figure out a new identity now that he’s “not police” any more. He’s in the assisted living facility because he was shot and needed a place to recover. He has the will to survive but he’s not always sure he has the heart. And there are so many things that he’s lost with the coming of age.

“I shoveled some eggs into my mouth. I chewed for longer than eggs ought to require chewing— out of necessity, not for effect— and then I reached across the table to grab the plastic saltshaker. I shook it vigorously over my plate until the gelatinous yellow-white scrambled mass was coated with crystalline flakes. I took another bite, and this time, it was kind of crunchy. My doctor had warned me about my sodium intake, but salt was one of the only things I could still taste.”
Buck is pushing his unappetizing breakfast around on his plate when a specter from his past shows up and asks him for help. And while he is not at all inclined to help his visitor—an old nemesis from his days on the force—the man’s request rekindles his pride.

“You’re the meanest son of a bitch I ever met, Baruch. You’re mean in a way I never learned to be, no matter how bitter I became. You’re meaner than the soldier who shot my mother in the head. He looked pale and scared. You never looked scared. You never looked uncertain . Mean doesn’t weaken with age; it just curdles and gets more pungent. And, today, I need mean on my side.”

There’s a mystery here and Buck’s at the center of it, but that’s not the reason you’ll keep turning the pages. It’s Buck himself, and the character Freidman has wrought, inspired by his own grandfather. Cranky, cynical and not sure that longevity is all it’s cracked up to be, we’re drawn into Buck’s world through his first person point of view. And every single moment feels authentic.

Buck outlives his son, and his compulsive chatter at the graveside is so insensitive it makes his wife angry. The socially appropriate filters that people have wear thin as they age and many old people either take advantage of their advanced years to speak their minds with abandon or they retreat into passivity that the unwary mistake for acceptance. Buck Schatz is not going gentle into any good night and he’s not about to give bad guys a pass because he’s too old and tired to deal with them. Buck’s old nemesis is right when he says that meanness gets “more pungent” with age. Anyone who doubts that will know better after spending a few hours in his company just as anyone who knows—really knows—an old person knows that they don’t turn into saints when they get their AARP cards.

Friedman has created a great character here and this book is a terrific follow up to his debut novel, Don’t Ever Get Old.

Posted by Katherine Tomlinson at 8:37 PM