Review: Death of a Dyer by Eleanor Kuhns 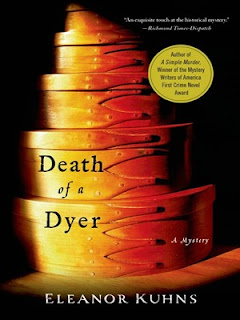 Death of a Dyer by Eleanor Kuhns is the second of her Will Rees mysteries about a Revolutionary War veteran-turned-itinerant weaver.

They didn't have Facebook back in the 18th century so hearing unexpected news about an old friend rarely meant something good had happened. For Will Rees, learning that Nate Bowditch is dead is not only unexpected; it's unbelievable.

"Dead?” Rees repeated, staring at George Potter in shock.
“Dead?” A spasm of unexpected grief shot through him. Although he hadn’t seen Nate Bowditch for eighteen years, not since Rees had marched away with the Continental Army in
1777, as boys they’d been closer than brothers. “Are you sure?”
Potter put down his cup with a clink. “Of course I’m sure. His wife herself told me of his death.”
“I’ve never met her,” Rees said.
“After almost twenty years? He lives— lived on the other side of Dugard, not the Atlantic Ocean. What happened? You were such good friends.”
Rees shrugged; that story was too long to tell. “We . . . went in different directions.”

George goes on to fill in the details, telling Will that his estranged friend was beaten to death with a "scutching knife" and that there's no question that it was murder. Worse, the main suspect in the murder is Nate's son, who was constantly at loggerheads with his father and who has now disappeared.  Will, an itinerant weaver by trade, would have known what a "scutching knife" is--an instrument used to prep flax for spinning--but it's not the kind of word that shows up on vocabulary tests in the average American middle school. Kuhn's casual use of terms like that, the kind of detail that's the product of immersive research, is just one of the reasons why this historical mystery is so satisfying.

With a historical mystery, as with any historical novel, it's the writer's job to create a believable backdrop for the story to unfold, giving the tale an extra dimension without overwhelming readers with archaic dialogue or too much specificity which can make it look like the writer is showing off, scoring points with his or her expertise like an over-enthusiastic member of the Society for Creative Anachronism who is shocked, shocked to find out someone doesn't know the difference between a knife and a dagger. You won't find that kind of thing in an Eleanor Kuhns book.

In 2011, she won the Minotaur Books/Mystery Writers of America's "First Crime Novel Competition" with Will's first case, A Simple Murder, and there are enough references to that case to fill in Will's background. As deft as those references are, though, Kuhns is even more graceful in the way she layers in the context for her characters' crimes.

He examined the body once again, holding the lantern high so as to have the maximum amount of light. When he was sure he’d seen everything, he lowered the lantern to the dirt floor
and pulled the canvas shroud over the bloodless face. He stood still, eyes closed and hands folded, saying good- bye.

Will is both a man of his times and a man who'd be recognized as a contemporary today--a single father who sometimes eats cold chicken standing up in his kitchen, worries about his knees freezing up if he sits too long and doesn't always know how to deal with his rebellious son. Two hundred plus years separate our world from Will's, but as he goes about investigating his friend's death, those years simply melt away. The book ends with a complication that will likely carry forward into the next Will Rees mystery, and it's something that could happen today as easily as it happens in the book. Kuhns has brought Will's world to life so well that all we see are the characters and the crime. The rest is icing on the cake.

Posted by Katherine Tomlinson at 3:40 PM