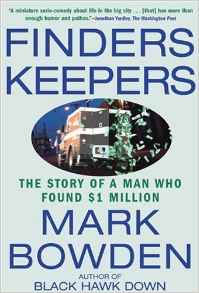 I was talking about non-fiction writers I admire the other day and I somehow left Mark Bowden (Killing Pablo, Blackhawk Down) off my list. This is the review I did of his book Finders Keepers back in 2002.


In Mark Bowden’s FINDERS KEEPERS, a South Philly loser becomes a folk hero when he finds $1.2 million that fell off an armored car. In 1981, the economy in Philadelphia was like a Bruce Springsteen song—jobs that have sustained families for years have disappeared and they aren’t coming back.  That puts people like 28-year-old JOEY COYLE on the streets without too many options.  Joey never finished high school, but on the docks, he was respected for his almost supernatural knowledge of machinery.  Unemployed, he just another speed freak.  And he’s getting into a downward spiral—using all his money to buy meth and then borrowing from his dealers.

This story really is kind of irresistible.  Joey is a natural born loser, although he has charm to burn.  (There’s literally no one with a bad word for him, even when he’s at his most “hopped up” from the drug he calls ‘blow.”)  There are moments in this strange saga where we’re almost doubled over laughing—from his manic search to find a suitable hiding place for the money to his attempts to shove money into his clothes at the airport before resorting to donning panty hose.

Joey himself is a complex character.  He’s a guy who completely believes that finding the money was a sign from God and a payoff for many years of hard work.  (And he isn’t afraid of hard work.  It’s being laid off from the docks that caused a lot of his problems.)  He’s a guy who’s true to his neighborhood, a guy who has big plans but not the wherewithal to pull those plans off.

His friends are all losers too—from his junky girlfriend Linda (a teenager who’s juggling him with another, more suitable guy) to the friend who makes plans to turn him in almost as soon as he gets some of the money in his hand.  What makes the story work is that Joey IS lovable and what happens after he gets the money couldn’t have been made up.

Bowden, who wrote BLACK HAWK DOWN and KILLING PABLO, is a fine writer and his non-fiction reads like the best kind of page-turning fiction. You will be caught up in this book. And wish Joey well.
Posted by Katherine Tomlinson at 11:20 AM