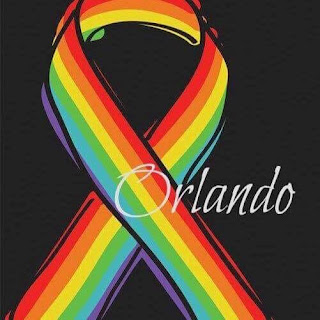 I am sick of colored ribbons.
And it's nice that landmarks around the world are lit up with rainbow lights as nations show their solidarity. But I'm sick of symbols.
What I really want is a Congress that will pass a gun law that will keep automatic rifles off the street.
It's the weapon that killed all those little kids.
It's the weapon that killed those movie goers.
And now it's the weapon that killed those people having a good time on a Saturday night.
I wish I lived in Connecticut and could vote for Rep. Jim Himes, who walked out out of the room today rather than observe another meaningless moment of silence.
Vote your conscience.
Vote for people who support your stance. And don't accept lack of action from those who claim to speak for you if they don't. We have an election coming up and there are "down-ticket" races that are important. Do some research. Do your due diligence. And if you see a chance to vote for sane gun laws, then take it.
Posted by Katherine Tomlinson at 11:38 PM