I am a big fan of A. Lee Martinez' loopy brand of urban fantasy. I really enjoyed his book Monster, but somehow I'd never read Gil's All-Fright Diner (published in 2006).  ASll I can say is that now I've read it I hope you don't wait seven years to read it because it is a treat. 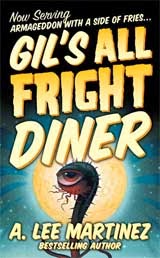 It begins with a vapire named Earl and a werewolf who likes to be called Duke, pulling off a road in the middle of nowhere to grab a bite to eat. the next thing they know, there are zombies crashing down the front door and Earl's met a lonely ghost and the teenage hottie determined to open a portal to the old gods has targeted Earl as someone who would make a dandy supernatural sacrifice. By the time a malevolent soul snarls, "I'll kill you and your little dog too" at Cathy, the aforementioned lonely ghost, the reader will be having a rollicking good time.

Part of the pleasure of reading the book is that Martinez has an eye for the absurd reality of paranormal and normal creatures interacting in the same space. The people in the small town where all hell is about to break loose are familiar iwth weird stuff happening (it's kind of like Haven in the show of the same name), and they roll with the weird.  He's also got a sharp eye for cultural detail and throws out offhand comments about  teenage girls and vampires that toss familiar horror tropes on thier heads.

It's not always easy to pull off a hybrid of horror and humor, but Martinez does it better than anyone since Christopher Moore and Practical Demonkeeping.

Posted by Katherine Tomlinson at 6:59 PM