Another book for fantasy lovers--The Familiars 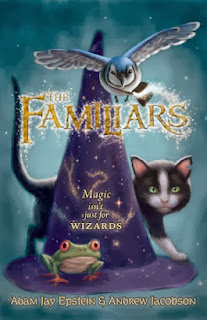 If you were a fan of Lloyd Alexander's books about Taran and his oracular pig, or have been looking for something in the vein of Terry Ptratchett's Amazing Maurice and his Educated Rodents (a wonderful book), then you might want to pick up The Familiars. The story of dark magic in a peaceful kingdom, three kidnapped apprentice wizards and the three familiars--a cat, a bluejay, and a tree frog--who go on a quest to save them.

The story is told from the point of view of Aldwyn, the cat and while he's no ordinary cat, he takes a while to grow int his destiny. There's genuine emotion here, and a fair amount of magical action. The writers have done a good job of creating a place that goes beyond the borders of the book, and there's a lot of backstory we don't see and the promise of more adventures. This is a book that young readers will enjoy, but so will their parents.

Posted by Katherine Tomlinson at 10:05 AM