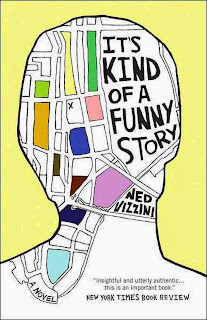 I was saddened to hear that Ned Vizzini killed himself this week after living with depression for more than half his life. He was the author of, among other books, a novel about his struggle with darkness. It's a book that promised a great career as a writer. But in the end his darkness swallowed him whole. Here's the review I wrote at the time.

In Ned Vizzini’s quasi-autobiographical novel, It's Kind of a Funny Story, ateenage boy struggles with clinical depression and finally realizes he might be able to conquer it one day at a time.

The trouble starts when CRAIG GILNER applies to a tough private school in Brooklyn.  He spends most of a year studying for the entrance exam and taking private lessons and undergoing prep exams.  When he isn’t studying, he’s hanging with his friend AARON, who also wants to get into EXECUTIVE PRE-PROFESSIONAL HIGH SCHOOL.  Aaron is a lot more laid back than Craig about the whole thing.  He spends most of his time smoking pot and having sex with his girlfriend NIA.  (Craig covets Nia in the worst way and when Aaron tells him about feeling the inside of her “pussy” and tells him it feels like the inside of a cheek, Craig nearly goes wild.)

Always sensitive, Craig gets clinically depressed after he gets into the school.  His parents (mom designs postcards, dad’s in health insurance) are very concerned and send him off to a psycho-pharmacologist named DR. BARNEY.  He puts Craig on Zoloft and refers him to a psychotherapist.  It takes a few sessions to find a good fit for him, but Craig really likes DR. MINERVA. And that’s when Craig’s problems really begin.

There’s an urgency and a freshness to this novel that marks the author as a real talent.  This is not the usual coming of age story.  It is, instead, a character study.  Craig is just a normal kid until his depression and anxiety spin out of control and he succumbs to the pain of it all.  Every step along the downward spiral feels completely real and plausible, as does the ambiguous ending.  (Craig is all right, for the time being, and hopeful that he will only get better with time.)

The characters here are not always developed to their fullest, but the author has a knack for giving us the detail that will make them come alive.  Craig’s mom shows up at the hospital toting the family dog, much to everyone’s dismay.  When she hugs Craig, the dog is in between them and growls.  (It does not go unnoticed by Craig that the dog began barking at him when he his depression began to take hold.)

Nia, the girl of Craig’s dreams, proves to be a superficial sort long before Craig realizes it.  She’s a tease and not really worth all the energy he pours into loving her.  (His friend Noelle speaks for most readers when she tells Craig that Nia is a slut.)

The various patients on the adult ward are a mixed bag.  The writer does a good job of making these damaged people come alive.  It is perhaps too on the nose that Noelle is a survivor of a suicide attempt brought on by sexual abuse.  Bobby and Tommy and Humble are actually pretty funny in their roles as drug burn-outs (what Bobby calls being a “garbage-head”) and they’re as close to the voice of reason as he’s going to find.

The doctors are uniformly sympathetic.  (This is not a ONE FLEW OVER THE CUCKOO’S NEST situation, although everyone kind of hopes that it might be—at least among Craig’s posse.)  One doctor in particular has a special knack for getting to the bottom of what’s bothering Craig and offering solutions.  (Solutions are ANCHORS in Craig’s parlance, just as drawing the maps is a way for him to stay grounded.)

We like Craig and really wish him well.  The descriptions of how he is affected by depression and anxiety get to us on a completely visceral and emotional level.  (The author slips in some statistics on how many people in the US have depression or other anxiety disorders, and the figures are high enough to pretty much include everyone in the depression continuum.)

The problem with the book as a whole is that it gives us a backdrop and it gives us lots of characters, but it doesn’t really give us a story.  Unlike, say, ORDINARY PEOPLE, where there was a beginning, middle and end to the boy’s tale.

This well-crafted novel is as real as it gets, a story told without self-pity and with large dollops of humor.  Once you've read it, you won't be tempted to tell a depressed friend to "cheer up." Because it's just not that easy.

I never saw the movie based on this book. Did anyone?

Posted by Katherine Tomlinson at 1:04 PM

Labels: It's Kind of a Funny Story, Ned Vizzini suicide