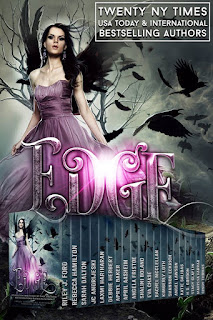 Before my book Bride of the MIdnight King was picked to be in a boxed set (For The Love of the Vampire), I didn't really know that boxed sets were a "thing." I noticed them every once in a while on Book Bub ads, but had no idea they were usually such great deals. They're like sampler chocolate boxes where you can try out a lot of new writers for not a lot of money--usually either free or 99 cents.

In the past month I've seen a lot of boxed sets featuring some of my favorite writers--Christine Pope, Stacy Clafin, Rebecca Hamilton--going by.  And here's a boxed set that's just gone up, featuring 29 best-selling authors (some of them INTERNATIONAL best sellers.)  Edge is only 99 cents on all platforms including Amazon. You better believe I've already snagged my set!
Posted by Katherine Tomlinson at 3:16 PM