A review of Monica Hesse's mystery GIRL IN THE BLUE COAT 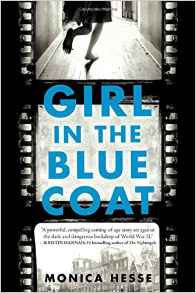 Girl in the Blue Coat was just published last week and already it's started collecting some buzz. that's not surprising. It's a book with a genuinely twisty plot, memorable characters, and a well-researched and immersive sense of time (1943) and place (Amsterdam).

This novel begins like a classic "locked room" mystery, although the mystery isn't how someone was killed in a locked room but how someone escaped from a locked room and for what reason? Monica Hesse's novel is set in 1943 Amsterdam, a place controlled by the Nazis whose will is enforced by the "Green Police" who can stop anyone, anywhere, for any reason.

As the story opens, Hanneke Bakker is riding her bicycle on her delivery rounds when she's stopped by a handsome young Green Policeman. Flirting with him, she manages to fluster him enough that he shoos her away, telling her he doesn't have time for silly little girls like her. But she's not a silly girl; she's a black market operator who sees what she's doing as an act of defiance against the occupation, no matter how small.


Hanneke is still in her teens, a girl who has already seen her share of hardship. She is the sole support of her parents--a crippled father whose work as a translator as dried up, and a perpetually paranoid mother who worries that the family could be denounced if any of their neighbors find out they listen to the BBC news. Hanneke's first love, Bas Van der Kamp, is dead, killed in action defending the city, and she blames herself (as does Bas' mother) because she encouraged him to join the military.

Hanneke has hardened her heart and pared her life down to basics. She doesn't do favors for people and she doesn't wnat to get close to anyone else who might die. And then one of her customers asks her to do her a favor--offering to pay--and a crack forms in Hanneke's stony facade.

This book is filled with terrific period research that puts us right in the heart of Amsterdam as Jews are being rounded up and citizens are being forced to ration groceries and kerosene and even firewood. (Rationed firewood plays a pivotal role in one suspenseful scene.) There is a terrific sense of time and place here. 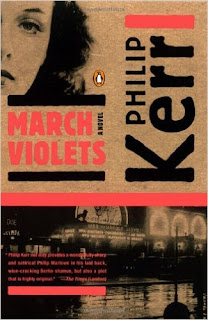 There are also great characters, almost all of them women and almost all of them tremendously complex and layered people who surprise us at times. There's a little hint of romance, but Hesse never pushes it, and we find ourselves wondering if this is the first of a series, the way Philip Kerr's March Violets was the first of his Berlin Noir novels about Bernie Gunther, private eye.

If you like historical mysteries, this is one for the TBR pile.
Posted by Katherine Tomlinson at 10:37 PM