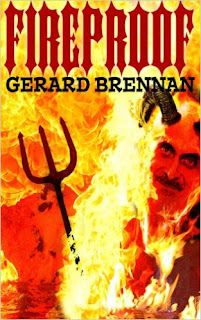 Mike Rocks has a bad attitude. Sent to hell for murdering a man, he doesn’t seem to be taking his fate all that seriously. Despite having his own personal demon tasked with tormenting him for all eternity, Mike is not impressed. And that presents a problem for Lucifer. Big Red really can’t have it getting around hell that Mike is impervious to the pain of damnation so he offers him a job. He wants Mike to “take a crack” at developing a new religion—Satanism, of course. Mike jumps at the chance and no sooner has he signed the phonebook-thick contract than he finds himself back in West Belfast, with a handsome new face (he thinks he looks Italian) and a thirst for vengeance as strong as his thirst for a pint. He quenches both at his former local, and that’s when things start to go sideways.

Back in hell for a tune-up with Lucifer, Mike finds himself on a short leash with an imp on his shoulder kibitzing on his every move as he puts the devil’s plan into operation, starting with a sales pitch to a group of not-too-bright teenagers. What follows is a dark (very dark) comedy of crime and punishment with trenchant observations on pop culture and religious dogma gracefully woven into the fabric of the story.

Then there’s the violence. It’s not easy to turn murder into a comic setpiece (though post-Tarantino, a lot of screenwriters are still attempting to do just that) but Brennan pulls it off—not once but several times. The scene where Mike fussily measures and worries about load-bearing walls while he’s setting up a crucifixion is just bonkers, especially when he and Cadbury discuss what they’re going to do while they’re waiting for their victim to revive from the drugs they’ve given him.

Mike Rocks may be a murderer but he’s awfully good company. And really, don’t you just know some people who need murdering? It’s hard to compartmentalize this book. It’s a little bit Celtic noir, it’s a little bit urban fantasy, it’s even a little bit like Neil Gaiman’s GOOD OMENS on acid. With blood and a three-headed dog. So forget about labels, just enjoy the read.

On Friday, April 15, Kattomic Energy will post an interview with Gerard Brennan.

Posted by Katherine Tomlinson at 11:51 PM