A review of A Darker Shade of Magic by Victoria Schwab 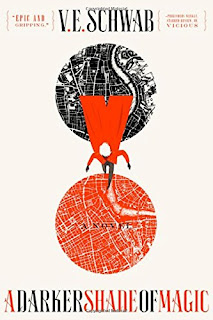 In Victoria Schwab's novel, a pickpocket and a mage must join forces to save the interconnected worlds in which they live.

A lot of work has gone into building the world of this book, a flat-out fantasy adventure with several very engaging characters and enough treachery and magic to fuel a season of GAME OF THRONES.

This is a book that’s suffused with magic—blood magic, elemental magic, you name it. The magic builds from the small to the epic, and the magic battles are very satisfying. (Fans of this kind of material may see some parallels to Katherine Kurtz’ fantastic DERYNI CHRONICLES, which are history-based and use an alternate Wales as their location.)

The book is also stuffed with plot, more storylines pinwheeling around than there are alternate Londons. And adding to the quests for identity and the magical danger are … PIRATES.  It’s almost a bit too much.

There are some great visuals here, from the mundane magic of a character turning his coat inside out and sideways to turn it into a completely different garment and the lovely display of telekinesis when he’s demonstrating that the little box of elements is NOT RIGGED to the Enthusiast.

The characters draw us in. Kell is a rascal and a rover, a character the author describes as equal parts “Prince Hal and Jack Hawkins.” Even his real name is a mystery, the “Kell” taken from the KL inscribed on a silver knife that was with him when he was brought to the palace as a child. Kell is reckless and driven but not careless or stupid, and as the story unfolds, we find ourselves more and more engaged in his quest to learn more about himself and to find his way in the world.

Lila is a type we meet a lot in fantasy novels (and fantasy gaming), a clever (and beautiful) thief. She’s a solid character with a lot of dimension but it’s disappointing that except for the Queen in Red London and the White Queen, there don’t seem to be many other women in this world. No women on the Royal Guard, no princesses anywhere. It’s a very male-centric fantasy world.

Holland is actually the most interesting character. He is a good villain but he’s also a man whose magic has been turned against him, a man who is bound to the evil rulers of his realm. What they’ve done to him is TERRIBLE and even as he hunts Kell and Lila we can feel compassion for him.

The characters surrounding our protagonists are all nicely nuanced and fill out a world that is rich in detail and logically organized.

As with George R. R. Martin’s GAME OF THRONES, the different royal houses all have their own sigils and their colors. Black London intrigues us and the black stone acts very much like the ring of power in LOTR—it has great power and the wielder of the stone is very reluctant to let it go AND it has to be returned to the place of its making.  There are echoes of other classic fantasies here, but not that many and to be fair, all heroic fantasy shares a wellspring of mythos.

Posted by Katherine Tomlinson at 2:53 PM