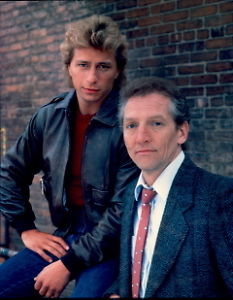 I love Youtube. Every once in a while when I'm looking for something to watch while I'm eating lunch or dinner, I'll head over there and see what I can find. Rummaging around on Youtube is like going through the stuff in your parents' attic; you never know what you're going to find. I can't remember what I was looking for when I stumbled across episodes of Night Heat.

Night Heat was a Canadian cop show that originally aired between 1985 and 1989. In the LA market, it played late night, and from the first episode I watched, I was hooked. It was a contemporary of Miami Vice (1994-1990) but the two shows could not have been more different in look and feel. Where Miami Vice was all neon noir and hip sountracks and pastel clothes, Night Heat was gritty and down to earth, the cases more personal, more intimate.


Night Heat was co-created by Sonny Grosso, one of the cops who broke the "French Connection" and it was rooted in reality. It was an adult show, not because it featured sex or language but because the characters were flawed people who wrestled with real demons. Like Da Vinci's Inquest, another Canadian show (created by Chris Haddock) that I really admired, Night Heat wasn't afraid to go to dark places, but never in a way that felt gratuitous.

The show starred Scott Hylands, an actor I saw several times on stage, most notably in a production of Comedians. (It was an ensemble cast that also included Keene Curtis and Jim Dale and Hylands had a monologue about the birth of his character's child that had the audience holding its collective breath.) Back then he was in his 40s, a man with a lean, rawboned face that always looked sort of haunted, like Matthew McConaughey in True Detective. Co-starring as his younger, hot-headed partner, was Jeff Wincott, Michael Wincott's older brother. Wincott's part was kind of a cliche--he was Italian and hot-headed! But Wincott gave the part a lot of depth and soul and it's a pity that his subsequent career tended toward low-budget martial arts movies.

Rounding out the cast was Allan Royal as a night-beat reporter who provided the bookends to episodes. Royal works a lot, in both American and Canadian TV (most recently he was George Franklin in the Lizzie Borden Chronicles), and as reporter Tom Kirkwood he was terrific. The show also featured Tony Rosato as a likable scoundrel named Whitey, who was as a welcome note of comic relief.

A lot of actors passed through the show on the way to getting their own series--Marc Gomes and Denis Forest--and on their way to bigger parts, like Jennifer Dale, Eugene Clark, and Clark JOhnson. One of Keanu Reeves' first credits was playing "Thug #1/Mugger" on Night Heat.

If you like smart cop shows, you should check it out here.
Posted by Katherine Tomlinson at 5:54 PM