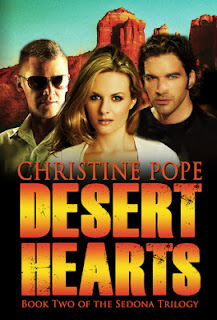 Desert Hearts is the sequel to Bad Vibrations, and the second in Christine Pope's "Sedona Trilogy" of romantic adventures. Set in that beautiful red-rocked city (whish the author clearly adores), Desert Hearts ups the ante in every direction and the stakes are nothing less than saving the world.

Psychic Persephone, the heroine of Bad Vibrations, is back, but this time the focus is on her friend Kara Swenson, whose book store is a hub for UFO enthusiasts (both locals and tourists). Kara is a geek--her dog's name is Gort and he is a terrific character--but working in a bookshop, even one she owns, was not how she expected life to turn out. She's feeling overwhelmed and under-loved when the book opens. And then a handsome, green-eyed stranger shows up and shakes up her life.

If you liked Bad Vibrations, you are going to love Desert Hearts, which can be read as a stand-alone. The characters are all back, including Jeff Makowski, an unkempt hacker who forms a deep attachment to Kara's sister Kiki, Lance the taciturn UFO hunter with a mysterious past, and Michael Lightfoot, who has seen a lot of odd things in his life and is fazed by none of it. This cast of characters is joined by a sexy Man in Black with a sense of humor, Kara's nosy neighbor who is very interested in her house guest, and various and assorted friends, colleagues and villains. The "world" of the story is fleshed out nicely, and the characters have context. We believe these people are friends. And Kara's relationship with her younger sister Kiki feels real and honest. They love each other, but they also know how to push each other's buttons, just like real siblings.

Everything is bigger in this book--the romance, the action, the tension. There are some truly scary scenes here and Pope does a fine job of balancing sex and suspense. (Let's just say Kara does not feel under-loved by the end of the book.) Whether you like romance with a dash of mystery and adventure, or like your adventure leavened with a little love, Desert Hearts is the book for you.

Posted by Katherine Tomlinson at 5:29 PM