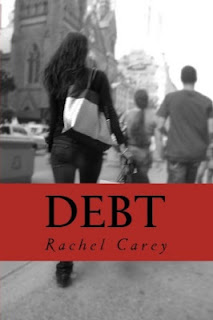 In Rachel Carey's debut novel, Debt, money (or lack thereof) and class hold roughly the same importance they do in a 19th century novel of manners. She has taken the conventions of chic lit (all the fancy restaurants and mindless consumption you see in books like Bergdorf Blondes) and mixed them with a subtly snarky style that evokes a 21st century Jane Austen.

She is keenly observant, pricking her characters' pretensions with subtle gibes that are so sharp you almost don't notice them until they draw blood.

The characters--and there are a lot of them--are all fully realized. There's the entitled Nadya--it's her world, you just live in it--and the totally adorable Clyde. Our narrator is would-be novelist Lillian whose work in progress is so downbeat it even depresses her and who is beginning to regret the way her student debt is piling up without her having much to show for it. That would depress anyone.

But this is a comedy, a multi-layered farce that treats money the way Sex and the City treated sex. Carey has a good time tweaking pop culture--there's a hilarious running gag involving a blog called "shopacovery"--and everything about Lillian's pretentious writing teachers will resonate with anyone who's ever taken a writing class.

This book is subversive and sly and extremely entertaining. If you liked books like Confessions of a Shopaholic and The Devil Wears Prada, you will love Debt.

Posted by Katherine Tomlinson at 6:14 PM