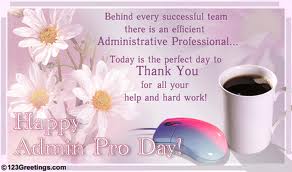 I understand that a lot of holidays were invented by the greeting card industry to sell more cards, but I've always been onboard with Mother's Day and Father's Day. Grandparents' Day never really resonated with me, though. It's somewhere between Arbor Day and Columbus Day (the optional holiday in business) on my personal calendar.
I was blissfully  unaware that there was such a thing as "Administrative Assistant Day" until today though. (I HAD heard of "Secretaries Day" but this appears to be a separate and discrete holiday.)
Here's the thing. I paid my way through college working office jobs. When I moved to Hawaii, I spent several months working as a secretary at the Honolulu Gas Company while I freelanced for the Downtown Honolulu Magazine. I was eventually hired by Aloha Magazine and gratefully left the business world behind.
I learned a lot from those jobs, skills both useful and practical ranging from the best way to unjam a copy machine to the subtleties of office politics. I also learned some harsh lessons about hierarchy and protocol and the way the world works. We all want to be appreciated for who we are and the contributions we make to our companues. If we're very lucky (and I mostly was), corporate appreciation is expressed in decent paychecks and generous vacation time and good benefits and perks. Perks are nice. The last "real" job I worked as director of development for an independent producer, my boss gave everyone a month's salary as a Christmas bonus. My good friend, who held the same position at a large studio, got (no kidding) a fanny pack emblazoned with the corporate logo and filled with individual serving packages of Oreos and Fig Newtons.
Guess which company had a morale problem?
I'm not someone who wants a gold star just for showing up. I actually think that getting a good day's wage in return for a good day's work is a fine social contract.  What I'm saying is that if you do buy into "Happy Administrative Assistant Day" (which to me always sounds just a bit condescending and if you look at the cards, assumes the AA is female), buy into it in a way that's meaningful for both the employer and the employee.
Cards are nice.  Who doesn't like cards? But if you really want to show your appreciation for your administrative assistant, the way to do it is to give the AA a paid day off (as Reynolds Aluminum used to do for employees' birthdays) or give them a cash bonus or a multi-purpose gift card. Do something that shows you really DO appreciate your assistant. Because a greeting card just doesn't doesn't really send much of a message these days.

Posted by Katherine Tomlinson at 1:27 PM