I have spent most of the last week in bed, which would be great if the rest of that sentence involved a tall dark stranger and a hotel room in the South of France. Alas it has more to do with waking up at midnight with an atrophied tongue, a lump of fleshy stone as scaly as the bottom of fishing boat at the end of a season. Pretty much the only time I've left my cave of sheets and blankets is to rehydrate--chicken noodle soup has lost any appeal it ever had--and to make more slippery elm tea. If ever there was a substance that made you glad you've lost your sense of taste, it's slippery elm tea.
Orange Cat is delighted.
His goal in life is to sleep 23 and a half hours out of every day and the only reason he doesn't pursue this goal more fervently is that he gets lonely. There's no one to pet you while you sleep, or play with the laser pointer or tell you you're a good boy.
The only good thing about this whole cold/flu thing is the dreams.
I have been having big, huge, technicolor dreams.
Which is unusual.
I rarely remember my dreams.
I was not a kid who had nightmares. I can remember only one nightmare in my whole childhood and it was more a series of images that caused me anxiety than anything else.
Those anxiety dreams everyone has in college?
I had one.
Once.
And even as the dream was unspooling in the Cineplex of my mind--a narrative involving signing up for an advanced math class and never going and having to take a final in it--I was saying to myself, "You would never sign up for an advanced math class."
About a decade ago, following some event--probably 9/11--I had a series of truly awful dreams involving earthquakes and blood. In one I was roaming the halls of what I knew to be my high school in Richmond but it was in Burbank. Classes were in session and my mother turned a corner and told me I needed to tell everyone to get out, there was going to be a quake and the building was going to collapse. "They're not going to listen to me," I protested. "Tell them your mother said so," she said. "Tell them your mother is dead." Which at that point she had been for 15 years or so.
There was also a dream involving me asking my best friend to kill our two cats because they were hungry and we couldn't feed them.
I am mostly glad I don't remember my dreams. 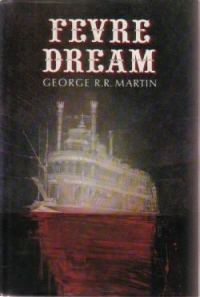 But this week my dreams are so bizarre that they're notable. I was Brad Pitt and Anjelina Jolie's nanny in one. In another, I dreamt the whole plot of a story I've been working on. I remembered everything when I woke, but the distance from the bed to the nearest pencil was just too far. By the time I woke again, the story was long gone.
I'm about one day away from feeling completely human again and I hope to have a dream I can turn into a story like some of my friends do. But in the meantime, I am rereading George R. R. Martin's wonderful vampire novel, Fevre Dream. It's the first book of his I ever read.

Posted by Katherine Tomlinson at 7:43 PM