I am following The Following 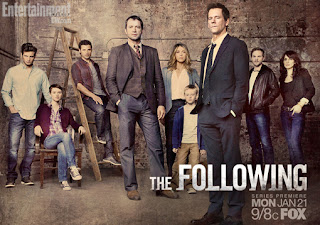 I don't watch a lot of TV. Mostly it's because as a freelancer who also writes on the side, I had to make a choice about how to spend my free time and writing won out over TV watching. (In other words, I'm not being a TV snob, I know there's good stuff out there.  And I am the first person to admit that a lot of what I do watch is totally silly.) But as someone who grew up with TV, I'm not often surprised. At least not by American television shows. The Following is a total surprise.
I expected to like it. Billed as dark. Starring Kevin Bacon and James Purefoy.
Kevin Bacon and James Purefoy. Every week in my living room. For free.
I'd seen Diner and Footloose and Tremors (he and Fred Ward were magic) but the moment I became a Kevin Bacon fan was during his one scene in JFK where he played a hustler named Willie O'Keefe who goes off on a rant. One of the reasons I really liked his bit was that he was doing a southern accent and HE GOT IT RIGHT. Bad southern accents make me nuts. You can see a really awful clip of the scene on YouTube. It's mesmerizing.

He should have won an Oscar for The Woodsman, a movie about a paroled child molester that he produced and his wife Kyra Sedgewick co-starred in. There is a moment in that movie, a scene with a child actress that will stop your heart, but movies like The Woodsman don't get nominated.
And James Purefoy? Well, the best Mark Antony ever, but he was one of the treats of A Knight's Tale too. And since I work for the company that made it, I've actually seen Solomon Kane, which is intense and looks like it was filmed completely in the rain and snow, which can't have been fun. He's all sleepy-eyed seduction in The Following, so that's not surprising.
What's surprising is that Kevin Williamson is not messing around.
While he's not filming the Richmond scenes in Virginia, he is filming them in Georgia, where the houses look very much the same. (I cannot tell you how many times I've seen Toronto sub for Richmond, most disturbingly in a movie about a killer who was captured in the city.  Toronto may be a lovely place but Richmond doesn't sit on the edge of a Great Lake.)
And the series is killing off characters. People you like. People you care about. I figured there'd be a few sacrificial lambs but not anyone meaningful.
And he is NOT afraid to GO THERE. Last night's episode with the kidnapped child being taught the pleasures of killing insects and small animals was truly creepy in a way I have never seen put on screen. 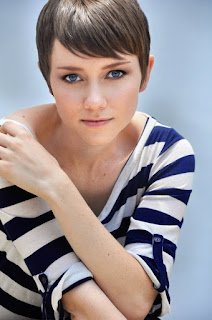 And I'd been surprised to by the actors who are in the supporting roles.
I'd never seen Valorie Curry, the actress playing Emma, but that's my loss. She is fantastic. Tiny and scary and just so damn good.
So, I don't watch much television, but I'm watching this.
Posted by Katherine Tomlinson at 12:48 PM