Book Review All Due Respect 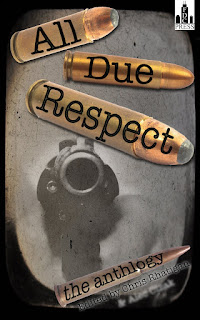 ALL DUE RESPECT
Edited by Chris Rhatigan


I approach anthologies the way I approach the tables at a potluck dinner, wary but hopeful. I know that there will always be someone who brings a retro-ironic Jello salad made with lime gelatine and cottage cheese. (And I didn't like it when my grandmother made it.)
If I'm lucky, there will also be a bowl of my favorite white trash indulgence, Five-Cup Salad. (1 cup mandarin orange slices. 1 cut pineapple chunks. 1 cup minature marshmallows. 1 cup grated coconut. 1 cup sour cream. It's insanely good and full of vitamin C!)
And if I'm really lucky there will be a dish on the table that I've never tasted, a combination of flavors and textures hitherto unknown to me but delicious from the first bite.)
All Due Respect, the new anthology from Christopher Rhatigan's Full Dark City Press, is a groaning board of treats, from the wonderfully named "The Great Whydini" by David Cranmer to "A Drink Named Fred" by Tom Hoisington. (Seriously, who's not going to read those two stories first?) Everything is good here, not a green bean casserole in the lot.
This is an unthemed anthology but the common thread is crime--all kinds of crime and the criminals who commit them, some of them planners and some of them opportunists as in Patricia Abbott's 70s story "Wheels on the Bus."
Some of the stories are about the knife-edge between life and death, like Matthew C. Funk's "His Girl," and Erin Cole's visceral "7 Seconds," one of two stories that seem to have been written in the wake of Sandy Hook. (The other is "Ratchet" by Stephen D. Rogers, a story that just drips menace laced with surprise.)
There are first lines that grab you, like "By the time I got there, they'd already taken three of his fingers" ("Habeus Corpus" by Benedict J. Jones) and "Gilberto's mama was a whore--white chick with more tattoos than teeth, even before skin ink became fashionable." (Gary Clifton, "The Last Ambassador t6o Pushmata." The stories are stuffed full of lines you want to write down so you'll remember, or lines you wish you could forget because they're so good you wish you'd thought of them.
Some of the stories have twist endings, some are on a straight line to a bad place from the first paragraph. And the aforementioned stories by Cranmer and Hoisington? They do not disappoint. In fact, nothing here really disappoints except the lack of women writers. Out of 29 stories, only three were written by women. Ladies--I want to see a better showing next time!
At 175 pages, this anthology is just the right length to while away a Saturday morning if you have the time to gobble it up whole.

Posted by Katherine Tomlinson at 12:25 PM