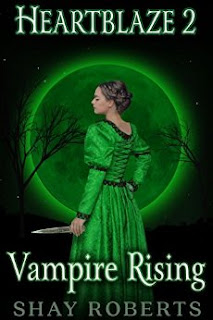 This is the second book in Shay Roberts' Heartblaze Trilogy, and unlike some series that seem to go through a "sophomore slump"  with sequels, this second outing with heroine Emma Rue is bigger and better and takes the story to a place where the stakes are monumental. (Yes, in this book, we face TEOTWAWKI,)

I read a lot of paranormal romance and urban fantasy and books with vampires and werewolves and witches seems to fall into two categories. There are those that simply mimic what's come before, and give us the same old/same old tropes that make readers want to roll their eyes at the very thought o reading another vampire book. And then there are the paranormal stories that give us something new. The Heartblaze series is in the latter category.

In this story Emma Rue comes to realize that she has a purpose and a destiny far beyond anything that she could have imagined. (Yes, I know, all heroines of paranormal romances are supposed to be special, but here, she really is special.) Just as the Heartblaze world is special. This is a dark fairy tale of a story, and when you learn what the dagger in Emma's hand (see cover) can do, you'll be stunned. Roberts teased it in Heartblaze 1, and he paid it off BIG TIME in this sequel.

There's a mythos at work here, a well-conceived, well thought-out universe in which the stories unfold. There's a rich world here--and the detail is impressive. In the first book of the series, the author introduced his characters and set them loose on an adventure that  moves from the present day to the 18th century. Heartblaze 2 expands that world, and what a glorious world it is! England in the Tudor age, the Peruvian rainforest, and a return to the New England where the heroine was born.

The book also expands the backstory of important characters from the first book--Stefan, whose actions have estranged him from his werewolf community and brought him into an uneasy alliance with a trickster godling; Rowan, a witch queen whose plan to help humanity contains the seeds of destruction; and Julian, Emma's soul mate and true love, whose very soul is in jeopardy. It's a feast for the reader and unlike the typical paranormal romance where the only thing at risk is whether the hero and heroine will get together. Yes, there's romance here, but there's also so much more.

If you haven't read the first book in the series, Heartblaze 1: Vampire Soul, it's free here.  If you sign up on the author's website, he offers a free "starter library" that includes the first book, three novelettes set in the Heartblaze world, and a special "origin" story about Emma. Check it out here.

Posted by Katherine Tomlinson at 5:56 PM