New Orleans, Prohibition, and a mystical speakeasy. I'm there! 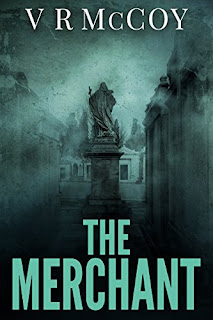 I've only visited New Orleans once and it was before Hurricane Katrina devastated the city. But it really is one of those places that isn't like any other. I'm a sucker for stories set in the big easy, and this one, V.R. McCoy's The Merchant, looks like it's right up my alley. The author cites Walter Mosley, James Patterson, Stephen King, and Tom Clancy as his inspirations, and just reading the blurbs of the other two books he's published, I believe his work has "commercial" encoded in its bookly DNA.

This is how The Merchant begins:  It was the year 1187 after his death. It had been raining fire for most of the night ..."  I don't know about you, but there's no way I'm going to stop reading after that. Kindle "look inside" tool--you just made a sale!
Posted by Katherine Tomlinson at 8:27 PM