Picnic by the Lake of Time...out next week! 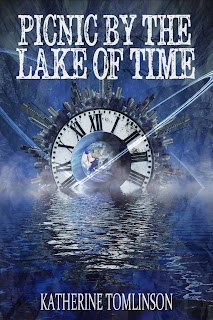 I have been playing around with a time travel idea for a while, and this novelette is going to be my first in the series. Hare is the opening:

The fifties were not my first choice as a time to seek refuge and 1955 was not my first choice of year, but as I did my research and exercised my due diligence, it became obvious that 1955 was probably the best place to lie low. For one thing, though I needed to hide somewhen fairly low-tech, I didn’t want to go so far into the past that I had to grow my own food and build my own house.
I also needed to pick a year where I could blend in without too much explanation.
The fifties were perfect for that. The decade had telephones and television and indoor plumbing and air conditioning but it didn’t have facial recognition software or stoplight cameras or laws requiring you to prove your citizenship when looking for a job. You might get asked to show your social security card, but it was easy enough to forge one of those with a totally meaningless SSN because in the days before computer databases, what were they going to do, make a long-distance call to another state to check a birth certificate?

World War II had uprooted many lives and fractured many families, so in the fifties no one really questioned why an unaccompanied woman wearing a wedding ring might suddenly show up alone to rent a room in a small town.

I was only 26 but there had been plenty of teenage brides in the 40s, girls who’d married their sweethearts before they left to fight the Good War, offering up their virginity as a going away gift or as a sacrifice to some dark god in hopes that he or she would return their man safely home.
Mrs. Winters, the woman who rented me a basement room in her home, kept a folded flag in a triangular case on her living room mantle. She hadn’t asked me for my story. Neither had her other boarders, who mostly kept to themselves.

Meals were included in our rent, so most of us shared supper around Mrs. Winter’s large dining room table, but the conversation was general, and limited to compliments about the food, comments about the weather, and comments about the books we were reading and the movies we liked.  Miss Leila Robinette, who shared a room with her sister Miss Sharon Robinette, admitted to having seen East of Eden three times. “And not because she’s an admirer of John Steinbeck,” her sister teased as Miss Leila blushed. Henry Bascomb, a young law student and the only male boarder in the house, agreed it was a fine movie, and he blushed as well. That was about as personal as the supper conversations got.
After the meal,  Mrs. Winters would often retire to her living room to listen to the radio. We were all invited to join her but except for Miss Mabel Newton, none of us ever did. Everyone had their own lives and their own concerns. None of us was really looking for company.

Posted by Katherine Tomlinson at 4:58 PM