Last year, at the urging of a friend of  mine who is a best-selling novelist, I dipped my toes in the "paranormal romance" genre. I didn't want to use one of the typical paranormal creatures--honestly, I'll be fine if I never see another shifter story--and I wanted my heroine to have the power, not just be "the girl" who gets dragged along on the adventure. (And I did want there to be an adventure. Straight-out romances don't really work for me.) I started thinking about the powers my heroine might have and I thought of Anton Strout's great books about Simon Canderous and Rachel Caine's "Weather Warden" series. They aren't cookie-cutter books and I didn't want mine to be a cookie-cutter story either. 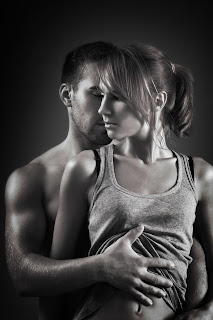 I was writing an aromatherapy book for a client at the time and I started thinking about what it would be like if someone could "see" things in a person's olfactory aura. I know that sounds weird, but there are all those studies about memory being linked to scent and I decided to try. The result was a woman I called Vetiver Quinn, an aromatherapist who can read people that way. And then I came up with a story that involved a government agent named Peter Eliades who needs her help foiling a terrorist incident.  And then I found a group of pictures of the couple on the left and a couple of covers came together. The first book was The Fourth Sense (smell being the fourth sense in the sequence of five senses: sight, hearing, touch, smell, taste).


The sequel is called The Oldest Sense. (Smell is the first sense we develop while hearing is said to be the lasst sense to leave us as we're dying.)  The storyline for the new book is a straight up mystery, and it's been fun to write. These books are just novelettes, and the idea is to eventually put them together in a boxed set.  Yes, I know, I really need to finish that novel. But in the meantime, I'm enjoying writing the shorter stuff.  Here's the prologue of The Oldest Sense written under the name Delia Fontana.

“I want it to smell like an NFL locker room at half-time during the Super Bowl when the other team is winning,” my client said.
Yikes, I thought, but what I said was, “Okay. Man tang and musk. Notes of camphor and mentholatum.”
“And leather,” she added. “Sweaty socks and leather.”
“Leather?” I asked, because I wasn’t following her. “I don’t think they really make footballs out of pig skin any more.”
She gave me a pitying look. “The players are wearing underwear.”
Of course, I thought. The players’ leather underwear.
“And a hint of chlorine.”
“From the showers?”
Again I got the look, this time tinged with a bit of impatience. “The smell of fresh spunk,” she said. “It smells like chlorine.”


“Ah,” I said, and made a note, then looked up at her expectantly. She was frowning at me.
“Vetiver, I need you to work with me here.”
“Chlorine,” I repeated and mentally ran through my storehouse of essential oils for something that would work with all the sweaty musk and dirty socks and locker room funk.
“And a fecal note,” she added, as an afterthought.
I nodded but didn’t look up. Most people don’t realize it, but there’s a fecal note hidden in a lot of perfumes, probably even some you’ve worn, like Chanel No. 5. It comes from a compound called indole that’s found in a lot of white flowers like jasmine, gardenia, and tuberose. When I was first starting to blend perfumes as a kid, I ended up with a floral mixture that smelled like someone had taken a dump on a bridal bouquet. My father took one whiff of it and said, “Well, shit happens.” We poured it down the toilet and the bathroom smelt like a camp ground outhouse for two weeks.
“Fecal,” I said and made another note.
“And maybe the scent of champagne in there somewhere,” my client added.
I looked up. “I thought the other team was winning.”
“Our team is going to make a stunning comeback.”
She smiled mischievously. “You’re just messing with me now, aren’t you?” I asked.
“Little bit,” she said, and her smile widened.
I smiled back. I liked Julie Roth, aka Lady J, the highest paid dominatrix in Los Angeles. She’d been a client of mine since before she quit her job selling advertising space for a glossy monthly magazine. Back then she favored heavy oriental scents like YSL’s Opium and Halston’s Night and when the perfumes were reformulated and discontinued, she stocked up on sample vials and half-empty bottles on eBay and Etsy.
My shop is next door to a Starbucks nestled into a corner of the first floor of a mid-rise office building, housing Julie’s old employers and she used to browse in the shop during lunch and on her breaks.
I’m generous with samples, so she never left without a bag full of lip balms and bath fizzies and little bars of scented soap. She bought my peppermint restorative lotion by the quart.
When she changed careers, Julie incorporated my products into her services. I’m not sure if she used the blends I crafted as massage oils or made her clients drink them, and I really (really!) didn’t want to know. She didn’t talk about her work, except in the most general terms, and she never mentioned customers by name.
Julie was a delightful person. Smart and funny and compassionate and engaging, she had taken life’s lemons and made limoncello. That was the kind of flair she had.
“Is this going to be a one-off?” I asked her, “or do you want me to keep the recipe on file?”
She thought for a moment and then smiled again. “I don’t know yet,” she said. “Let’s play it by ear.”
I could hear hope in her voice, which meant this wasn’t just business. My heart sank just a little. Julie may have made a seven-figure living catering to the desires and lusts of her fellow human beings, but when it came to her own love life, she was hopeless.
Not that I had much room to talk. The man I sleep with is currently on assignment in a place he can’t tell me about, doing something he can’t discuss. And even when he’s home, he’s a secret keeper. He’s one of the few people I can’t read and he likes it that way.
“Do you want a custom bottle, or will one of the matte black ones do?”
Julie thought a minute. “Can you do something that looks like brushed steel?”
“Sure,” I said.
“With the name of the scent embossed in the metal?”
“Sure,” I said, “I’ll need the name.”
“I have to think about it,” she said with another small smile. “I’ll let you know.”
She left my shop leaving behind a subtle whiff of Caron Poivre. A thousand dollars an ounce, I thought idly, wondering if any of my perfume blends would ever command a price like that.
I never learned what Julie would have named her perfume because two days after she visited my shop, her charred corpse was found in the trunk of her Mercedes, when a parking enforcement officer had ticketed it for being parked on the wrong side of Burbank Boulevard on street-sweeping day.
Arson investigators determined that she’d been killed in the fire pit behind her Stone Canyon house and then moved some time after her body had cooled.
They said the accelerant was some kind of perfume.
They said she’d been alive when she burned.
The police didn’t have any leads, they said. The investigation was ongoing.
But I knew something they didn’t.
Somewhere in Los Angeles there was a man whose scent had reminded Julie of sweat and leather and champagne.
And I was going to find him.
And I was going to read him.
And his scent was going to tell me who killed Lady J.

Posted by Katherine Tomlinson at 11:06 AM