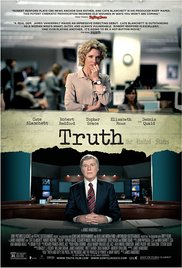 I've just watched Spotlight and Truth back to back and both of them were intense and realistic and Sixty Minutes, no television news show had ever been profitable--and in Spotlight, the shadow of the internet hangs over the newspaper office -- literally. I used to be a reporter, starting off as a magazine writer and then becoming a freelance cityside reporter for an L.A. weekly paper, then freelancing for a a syndicated news service. I rarely wrote hard news but I took my job seriously and i did it with pride. My Great-Aunt Marie had worked for a Chicago paper during WWII and when she came home from the night shift, she noticed that one of her neighbors was always up and talking to someone who wasn't there. She did some investigating and then had a chat with the FBI, who arrested the guy. He was a member of the German-American Bund and he was broadcasting on a radio.  Yes, my newspaperwoman great-aunt caught a Germany spy!!!
well-done. Both of them are about the financial realities of news organizations--before 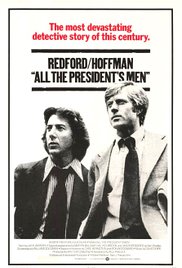 I grew up in a house where we read two papers every day, the Washington Post in the morning and the Evening Star at night. I don't even know if the Evening Star is still being published--afternoon papers were starting to die even when I was in  high school. On Sundays, my father would drive down to the bus station and pick up copies of the out of town papers.  So newsprint is in my blood and even though I've long since left the newsgatherine world behind, I'm still a news junkie.  And I love movies about journalists. I have a pretty short list of favorite movies in that genre and oddly, Robert Redford is in two of them and Michael Keaton is in the other two.

All the President's Men is a still my favorite of the four movies. It's beautifully acted, beautifully cast, written by the great William Goldman and directed by Alan J. Pakula.  the movie came out 40 years
ago and it still holds up. Truth, which came out last year, is about A Sixty Minutes story that blew up so badly it took down a couple of seasoned journalists, including Dan Rather. Redford plays Rather, a guy the brash young researcher (Topher Grace) calls "the old man," and while mostly he doesn't go for a full-on impersonation of Rather, there are times when he sounds eerily lke him. There's a lovely moment in the film (it's in the trailer too) when Topher Grace's character asks Rather why he got into journalism. "Curiosity, I guess," he says and then he asks his younger colleague why he got into the game. "You,"  he says. And the weight of that, the responsibility lands with Rather and Redford's expression is ... fantastically layered. 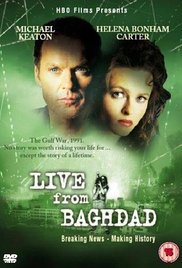 One of the central elements of Truth is the relationship between Rather and his producer Mary Mapes (Cate Blanchett). It's intense and without taking away any of the professionalism, it's explicity a father/daughter connection with the reason why explained by a character played by Dennis Quaid. (Quaid is good in this movie and remains on my short list of actors who deserve Oscars for the good work they've been doing for DECADES.)

And speaking of actors who have been doing good work for decades, Michael Keaton is outstanding in both Live from Baghdad and Spotlight. Unless you had HBO back in 2002, you probably never saw Live from Baghdad, which is about the early days of CNN and how they covered the first days of the first Gulf War, coverage that put them on the news map. As with Rather and Mary Mapes, Keaton's character shares a complicated relationship with a colleague (Helena Bonham Carter) that's soaked in sexual tension but never steps over the line. Keaton's character is a guy who gets things done even if it means bending the rules and "finessing" things. His scenes with David Suchet as an Iraqi Ministry of Information functionary, are superb.  It's worth tracking down. 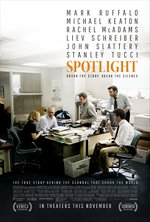 And as for Spotlight, which won Best Picture this year, you should see it.  It did not make much money ($88 million worldwide, which is $50 million less than Finding Dory made its opening weekend) but it's the kind of movie that corrals a bunch of great actors (Rachel McAdams, Jamey Sheridan, Liev Schrieber, Stanley Tucci, Mark Ruffalo) and then lets them loose in a story that's about something important--in this case the unfolding scandal over pedophile priests in Boston. The story does not glamorize the lives of the reporters. In some cases, family members are directly affected by the story, in one case a lifelong friendship is jeopardized. But the "Spotlight" team has a job to do, and they do it. I loved the movie.

The news business is changing. Reporters for Slate.com and Politico.com are carrying the fire. But I miss newspapers, I really do.

Posted by Katherine Tomlinson at 12:13 PM