Darknight, Book 2 of the Witches of Cleopatra Hill by Christine Pope 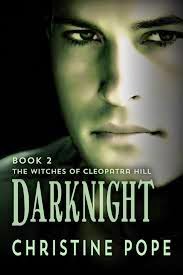 Christine Pope’s new novel Darknight (the second in her Witches of Cleopatra Hill trilogy) takes up one page after Darkangel left off. Angela McAllister, newly minted prima of the McAllister witch clan is in the hands of a rival clan, and the only thing she knows for certain is that the consort she’s bonded with is the brother of her clan’s fiercest enemy.

For Angela, biology is destiny and she and Connor Wilcox are fated to be together despite decades of enmity between the McAllisters and the Wilcoxes, a feud that has affected every witch clan in Arizona. Connor is equally eager to let bygones be bygones, and as the yule season approaches, the bond between him and Angela deepens. But that doesn’t mean that their respective families are happy about it or ready to play Secret Santa with each other.

The plot thickens in this book and the danger and tension is ratcheted up several notches as a dire plot unfolds that could destroy the consort connection.  It’s not just witches that live in Cleopatra Hill and in this book we meet some shape-shifters and witches too.

As always with Pope’s novels, the setting is just as important as the characters and if a reader ever visits Jerome, they could do worse than take the Darknight tour of local eateries (and wineries). With an engaging cast (both normal and paranormal), Darknight is a satisfying read and will whet your appetite for the concluding book in the trilogy. (And speaking of whetting your appetite, I defy you to read some of the chapters without your mouth watering from Pope’s vivid description.)

Pope has a number of giveaways scheduled for the book's launch. Here's a link to the contest running on GoodReads.

Posted by Katherine Tomlinson at 7:05 PM