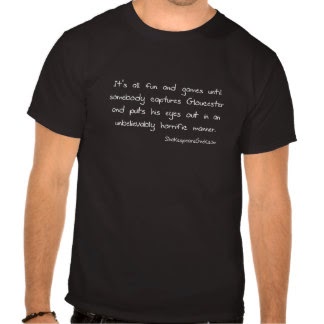 One of the things I love about the Internet is that even if your interests are really fringe, you can find your tribe. So if you're  a  shakespeare geek (which really isn't that weird) who wants to talk about different productions of a favorite play--say, The Tempest--you can always go online to find someone who has an opinion about the Ellis Rabb staging of the play in San Diego versus the Stratford festival version with Christopher Plummer as Prospero. And somewhere out there is someone else who saw the L.A. production of the play starring Anthony Hopkins, Stephanie Zembalist, and Ken Marshall, who was then hot thanks to a television miniseries on Marco Polo.

In 20111, the Education Portal has a great list of Top Ten Shakespeare blogs here. The list begins with Blogging Shakespeare (run by the people at the Shakespeare Birthplace Trust) and is rounded out by the Bard Box, a collection of online Shakespeare videos. Bard Box shuttered a couple of years ago but the site is still up and many of the links work. If nothing else, it's a great place to start looking for online videos. (Last year I stumbled across an online posting of a Hamlet production with a young, unknown Phillip Seymour Hoffman playing Laertes. He was just coming into his prime when he died, the age of all Shakespeare's really great parts for middle-aged men.  And we'll never get to see him perform them, damn it. But I digress.

I'm just a Shakespeare geek wannabe compared to the bloggers who post all Shakespeare all the time. Check them out!  And while you're at Shakespeare geek, check out some of their t-shirts, like the one pictured, 'It's all fun and games until somebody captures Gloucester and puts his eyes out."
Posted by Katherine Tomlinson at 9:40 AM