Book Review The Dead Do Not Improve by Jay Caspian Kang

If you like your noir leavened with humor and a lot of local color, you will LOVE Jay Caspian Kang's San Francisco-based, cross-cultural mystery, The Dead Do Not Improve.

THE DEAD DO NOT IMPROVE by Jay Caspian Kang

The lives of a detective and an under-employed Korean-American intersect when a woman is murdered in Jay Caspian Kang's novel The Dead Do Not Improve.

Philip Kim, a first-generation Korean-American, sleeps through the murder of his neighbor, Dolores Stone. He never knew her name until after the fact, just always called her the "Baby Molester," a name bestowed on her by Kathleen, the girl Philip followed to San Francisco and hasn’t talked to in a year. 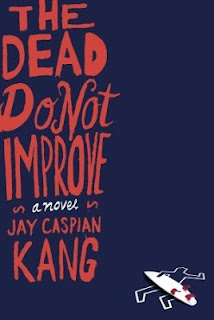 Philip often sleeps late and just as often is late to his job, working for a social network that targets men who have been dumped. (getoverit.com). He is responsible for greeting the new accounts and sending them chatty emails every so often. For this he’s encouraged to use the named "Philip Davis" because research has convinced his boss that no one trusts Asians when it comes to relationship advice.

The man investigating the murder is Sid (short for Siddhartha) Finch, and he's more interested in saving his marriage to Sarah than in solving the crime which is, as is often the case, a gateway murder that leads to a much larger problem.

The dual stories are both interesting and the worlds of Finch and Philip are populated by extremely good characters. Philip's internal monologues often have to do with Korean identity and there's a running motif about the Korean-American school shooter at Virginia Tech.

Some of the dialogue is absolutely hilarious, particularly the interactions between Sid and the waitresses at a restaurant called Being Abundance, where everyone seems to have a reddish glow. There’s also a scene at a vintage clothing store where Philip and a neighbor suit up for Dolores’ bizarre funeral that seems incredibly and indelibly San Francisco.

The story itself is chock full of local color and absurd riffs on life. (Kang is a journalist and he has a reporter's eye for detail.) The mystery itself gets bigger and bigger as the investigation goes on, but mostly the pleasure of the read has to do with the characters rather than the plot which gets really muddled at the end.

This is a fun and fast read, a character-driven story with a plot that’s intriguing even as it’s infuriatingly convoluted.
Posted by Katherine Tomlinson at 4:39 PM

Labels: Jay Caspian Kang, Noir, the Dead Do Not Improve