Book Review Maps of the Edge by Ian Creasey 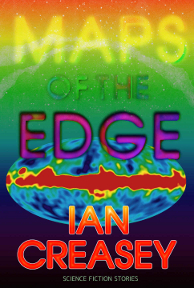 One of the writers I discovered during the 365 Day Challenge was Ian Creasey. Maps of the Edge is a collection of spec fic stories by Creasey published in 2011. (His novella, The Strawberry Thief, was published last October. I can't wait to read it.) Creasey identifies as a science fiction writer, but pigeonholing him into one genre really doesn't seem fair, especially after reading through this collection, which is a small sample of the more than 50-odd stories he's sold to magazines and anthologies.

The stories range over a wide spectrum of emotions. "Reality 2.0" is a hilarious riff on a new product from Microsoft, a re-imagination of math called "WonderNumbers" that takes all the hard work out of math, much to the dismay of mathematicians. "Now you can divide by zero" is the product's sales pitch for the software, which does away with a lot of inconvenient math concepts and formulae. "This is How it Feels" is a haunting story about loss and grief that describes the feeling as "a compost heap where rats endlessly gnaw over the scraps of your heart."

"Cut Loose the Bonds of Flesh and Bone" is a story about a mother and a daughter that also touches on one of the core concepts and conceits of the collection, the persistence of personality in an electronic afterlife. Many of the stories are surrounded and shaped by conspiracy theories and there are references throughout to a Conspiracy Channel--the people who work there and some of the shows that appear. And who doesn't love a good conspiracy theory?

Creasey is not just a storyteller, he's an actual wordsmith--a term that's thrown around much too easily. (In the opening story, "Erosion," he describes clouds as looking like "celestial loft insulation" and the phrase is just perfect.)

You don't have to like science fiction to like Creasey's stories but if you do, you will love them.

Posted by Katherine Tomlinson at 6:28 PM