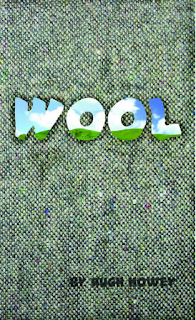 When a free-thinking woman is hired to be the sheriff of a self-sustaining silo world, a revolution is sparked in part one of Hugh Howey's epic novel Wool.

Inside the Silo there is order, and that order is kept by adhering to the PACT and to the ORDER and to a set of rules. One of the worst crimes in the silo is voicing a desire for a better life. When the job of Sheriff becomes vacant, the current deputy does not want it and recommends Juliette Nichols for the job. Juliette, daughter of the man who keeps the silo's nurseries running, is not anxious to leave the mechanical level of the silo where she's worked for years tending to the respirators that recycle the Silo's air, but is eventually convinced to take the position.

Her decision upsets the delicate political balance inside the self-contained structure and leads to consequences no one could expect. Soon Juliette is asking a lot of inconvenient questions about how the Silo came into being and other secrets that the people in power have kept from its inhabitants.

Howey's "arkology" is set some few hundred years in the future. We’re not sure exactly where we are, although at one point, a character sees a map with ATLANTA written on it. There are some nice world-building touches here, including a ritualized funeral that includes throwing vegetables and fruits into the grave to symbolize the circle of life.

The mechanics of keeping the Silo moving—the stratified levels with different functions—don’t quite work, but we’re willing to buy the setup. Far more interesting than the physical details of how the Silo function is the politics in play. Couples are not allowed to bond randomly—so Juliette and her lover kept their relationship a secret, never registering for the baby lottery. It’s not clear why this should be so, and that’s really one of the problems of the book. There are rules that seem to be in place just so the plot can move forward.

There are also a lot of mechanical contrivances and coincidences that move the plot forward as well. Still, the story moves forward with a fluid grace that keeps readers turning pages.

The characters in the book vary from strong—Juliette is a great character, a smart woman who is both beautiful and mechanically inclined. The villain, Bernard, is a an excellent antagonist, silky smooth in his power grabs. IT is his fiefdom, but he has grander plans. And he has secret rooms built underneath the servers he monitors and he has people at his fingertips and gate guards who can keep unauthorized access from occurring on his floors. He’s a type of character we’ve seen before, but the writer does a nice job with him.

Fans of dystopian YA will enjoy this layered introduction to a unique future world.

Posted by Katherine Tomlinson at 2:03 PM