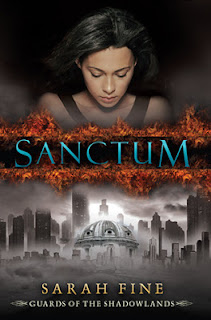 How far would you go to save someone you love?


In Sarah Fine's SANCTUM, a young woman goes to hell to retrieve her best friend, and finds the afterlife is not what she expected at all.

While the author gets major props for not mining the same old/same old tropes used in so many YA paranormals, and for injecting a strong dose of reality into the backstory of her characters, the set up is not nearly as accessible as many of the other shadowlands/otherworld/afterlife versions of the Orpheus/Eurydice myth.

SANCTUM is a well-written story by a writer who understands the genre very well and has twisted it around to make it darker and richer than the familiar aching angsty teen sex fantasy wrapped around a paranormal core. There's a little of that, along with the instant attraction that seems to be de obligatory with these books, but heroine Lela Santos (who could not be MORE out of place in her Rhode Island high school) has a mission that is more important to her than the relationship she develops with the hunky alpha male Malachi, one of the "Guards" who polices the infernal city.

There are some neat little twists to the conventions and tropes that are so overused in the genre. When Lela gets a tattoo, it's not a tramp stamp but a picture of her dead friend, and it's there as a promise and a pledge more than just skin art.

This is basically a quest novel and in many ways, it's a quantum quest in that just being on the quest changes Lela. One of the best things about the book is that it quickly leaves the high school world behind and takes us to a magical/supernatural/horrible place. The city is visually stunning, but the Judge who presides over it seems a lot like the Oracle in the MATRIX series, although she's not baking anyone cookies or smoking a cigarette. (One of the reasons we know that Lela is a tough girl is that she is smoking a cigarette at the beginning of the book, though she never does it again.)

We like Lela, who has escaped a horrible past and who has a very interesting destiny. The book includes a preview chapter of the next book, and it sounds pretty intriguing. In fact, it sounds more interesting than SANCTUM. That's one of the problems with reading the first in a series--there's a LOT of setup.

This is a promising start to a series, and it will be nice to see where it goes. Right now, it doesn't seem different enough--at least not to someone who reads A LOT of this kind of material (the Guards, in particular, seem a lot like the angels in ANGELFALL)--but Fine is a writer whose work is so enjoyable that readers will stick around to see what happens next.
Posted by Katherine Tomlinson at 11:57 AM