Feminist Fiction Friday is Back with Kij Johnson

Kij Johnson mostly writes short fiction, but her novel Fudoki was declared one of the best SF/F novels of 2003 by Publisher's Weekly. She's won a number of awards over the year and in 2012 her novella, The Man Who Bridged the Mist won both the Nebula and Hugo Awards. (You can read it here for free.) She also writes poetry and essays. You can read more of her work on her website.
An editor as well as a writer, she's worked for Tor Books, Dark Horse Comics, and as content manager for Microsoft Reader.
She's' not only won awards, but she's a final judge for the Theodore Sturgeon Award.
Twenty of her stories are archived at the free speculative fiction site (a treasure trove of stories by everyone from Isaac Asimov to Roger Zelazny. The stories by Johnson offer a large representative sample of her work and include such award-winners as "Fox Magic" and "Ponies." 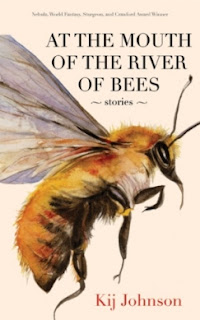 Fudoki, is the second in a planned trilogy set in ancient Japan. The first, Fox Woman, was a love story about a man and a fox woman (Kitsune.) Fudoki is about Kagaya-hime, a sometime woman warrior who may or may not be a figment of the imagination of a dying empress.
Her debut short story collection, At the Mouth of the River of Bees, contains 300 pages of her short fiction.
She gives great interviews.
"Making the Unreal Real at GeekMom.
"An Interview with Kij Johnson" at Apex Magazine
"A Terrifying Mix of Honesty and Rigor" in Clarkesworld Magzine
Here's a Los Angeles Review of Books review on At the Mouth of the River of Bees where the reviewer focused on the sexual politicsof the stories.
If you have a few minutes today, sample one of Kij Johnson's stories and come away refreshed and impressed.
Posted by Katherine Tomlinson at 7:30 AM