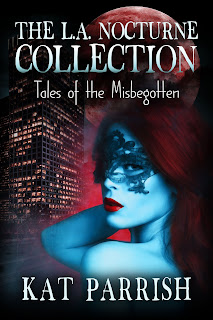 One of the first short stories I ever wrote for Dark Valentine Magazine was "Tired Blood," a tale of a vampire so old he'd developed dementia and forgotten he was a vampire. I liked the setting of the story so much that for the next few years, I kept writing stories set in my version of Los Angeles where the normal and paranormal co-exist. This fall, the novel based on that story, Misbegotten, will be published. (Better late than never.0 And as a run-up to that publication, I have released this colleciton of the "Misbegotten" short stories.

Some of these stories originally appeared in the collections L.A. Nocturne and L.A. Nocturne II, others have never been collected; a few were written just for this volume. I'm happy because the stories run the gamut. There are ghosts, shapeshifters (and not the usual kind), djinn, mermaids, sorcerers, demons, angels, and a were-bear. Also fairies. And unicorns and a centaur.

There are also vampires. Lots and lots of vampires. And a werewolf or two.  But not, I hope, your standard issue alpha wolf guys.  I hope you'll check out the collection. I had a great time writing these stories.
Posted by Katherine Tomlinson at 4:47 PM